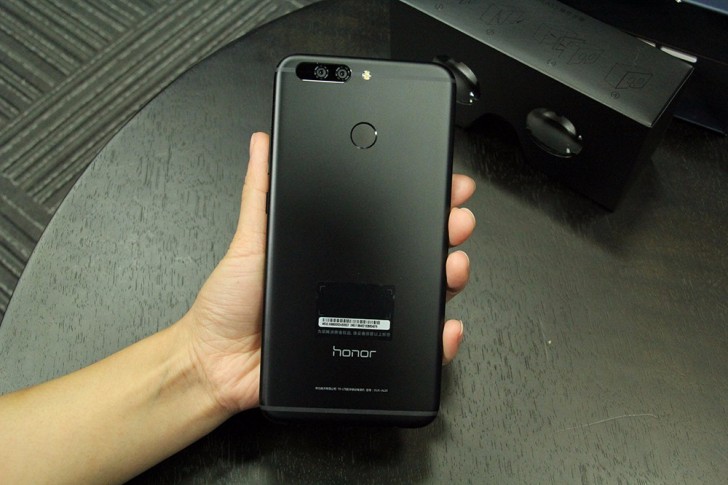 The purported image of the upcoming smartphone Huawei Honor Note 9 leaked on the web and revealed a dual camera setup on its back panel with large bezel-less display.
On seeing the leaked image, we expect that it will come with a Quad HD LCD display, 6GB of RAM, 12MP 4K-capable camera and it will be powered by a 4,000 mAh battery. Hence, these specifications are based on our supposition.
The date of announcement is still unknown and there is no official word from the company.
Except these we have no much details of the Honor Note , which will be the successor of the Honor Note 8, that was announced in China on August last year.

The high-end phablet Huawei honor Note 8 sports a QuadHD AMOLED display of 6.6” with the resolution of 1,440 x 2,560pixels, a pixel density of 443ppi, 4GB LPDDR4 RAM. It has the internal storage capacity of 32/64/128GB. It comes with the dimension of 178.8 x 90.9 x 7.18mm and weighs 219g.
It is powered by Kirin 955 chipset with an Octa-core 4xCortex-A72 and 4xCortex-A53 processor with a Mali-T880 MP4 GPU and runs on Android 6.0 Marshmallow. It features a fingerprint sensor and dual-SIM support, along with chip-level security.
The device includes a rear camera of 13MP with a large F2.0 aperture, an RGBW sensor, optical image stabilization and a front-facing camera of 8MP.
Connectivity wise, the device features dual-band Wi-Fi a/b/g/n/ac, GPS/GLONASS/Beidou and Bluetooth v4.2, but there’s no NFC support or MHL for wired video output. It is powered by 4,500mAh battery with fast charging.