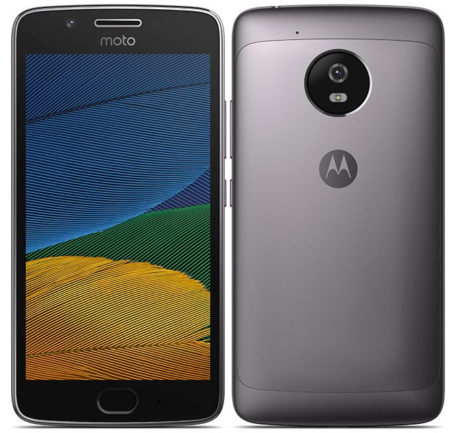 Last month, the subsidiary of Lenovo namely Motorola announced a couple of devices Motorola Moto G5 and Moto G5 Plus with metallic body at MWC 2017 in Barcelona. Now the company finally launched the Motorola Moto G5 Plus for the Indian users.
The smartphone Motorola Moto G5 Plus sports a Full HD display of 5.2-inch with the resolution of 1080×1920 pixels with Corning Gorilla glass 3 protection and it comes with 3GB/4GB RAM. It has internal storage capacity of 16GB/32GB, which can be further expanded up to 128GB via microSD card slot. It has the dimension of 150.2x74x9.7mm, and weighs 155g.
It is powered by 2GHz Octa-Core Snapdragon 625 processor with Adreno 506 GPU and runs on Android 7.0 Nougat.
The camera section of the device Motorola Moto G5 Plus features a rear camera of 12MP with f/1.7 aperture, 4K video recording, dual-tone LED flash, Dual-Pixel Autofocus, Sony IMX362 sensor and a front-facing camera of 5MP with OmniVision OV5695 sensor and f/2.2 aperture.
It packs a 3000mAh non-removable battery with TurboPower charging.  It has Dual SIM functionality and has Water repellent nano-coating.
It comes with Moto Display, Actions, twist gesture, and a One Button Nav mode that lets the users to navigate the interface with swipes on the fingerprint scanner.
Connectivity wise, it includes 4G VoLTE, WiFi 802.11 a/b/g/n (2.4 GHz + 5 GHz), Bluetooth 4.2, GPS. The company didn’t reveal the cost of the device, but it will be declared soon.