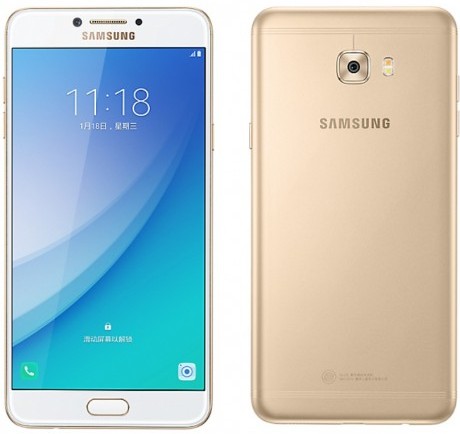 The mid-end smartphone Samsung Galaxy C7 Pro already launched in China in January ,this year after that it escapes to Hong Kong. Now the company has decided to launch the device in India. Since, the device Samsung Galaxy C7 Pro with model number SM-C701F showed its presence on Samsung’s India website.
The exact date of its launching and cost are still unconfirmed, but it is expected that it will be launched soon. The sale of the device is already going on in Hong Kong at $435. It will be available in three versions including Maple Leaf Gold, Rose Pink and Arctic Blue.

The smartphone Samsung Galaxy C7 Pro sports Super AMOLED display of 5.7-inch with the resolution of 1080pixels, 4GB RAM. It has the dimension of 156.5×77.2×7.0 mm and weighs 172 grams. It comes with the internal storage capacity of 64GB, which can be further expanded up to 256GB via microSD card slot. The Smartphone is powered by a 2.2GHz Octa-core Snapdragon 625 SoC chipset and runs on Android 6.0.1 Marshmallow. The Samsung Galaxy C7 Pro comes with dual-SIM functionality and features always on display and Samsung Pay.
The device Samsung Galaxy C7 Pro includes a rear as well as front-facing camera of 16MP with f/1.9 aperture. Both the cameras have the capacity of recording full-HD videos at 30 frames per second. It is powered by a 3300mAh battery.
Connectivity wise, it includes Wi-Fi, GPS, 4G LTE,Bluetooth 4.2,NFC, Samsung Pay and USB Type-C port.