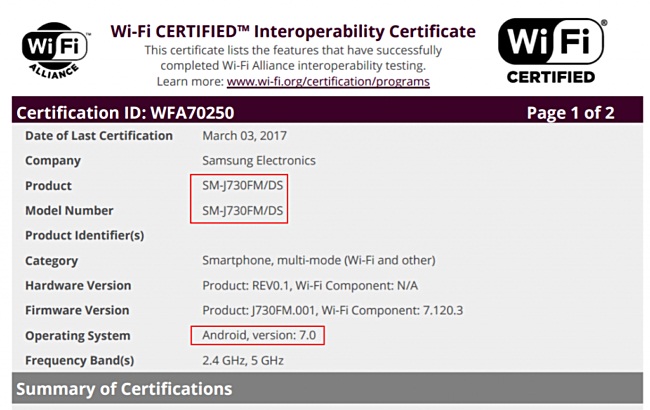 The upcoming device Samsung Galaxy J7 (2017) already passed the Bluetooth, FCC and also spotted at GFX Benchmark in recently. Now the device Samsung Galaxy J7 (2017) moved one step more forward to its announcement and received WiFi Alliance certification. The certification also unveils that it will run on Android Nougat.
According to the latest rumor, the smartphone Samsung Galaxy J7 (2017) will sport a display of 5.5-inch with the resolution of 720pixels, 2GB RAM, internal storage capacity of 16GB. It will be powered by Qualcomm’s Snapdragon 625 Socchipset with a 1.5 GHz octa-core Cortex-A53 processor and ARM Mali-T830 GPU and runs on Android 7.0 Nougat.
It will come with a rear camera of 8MP and a front-facing camera of 5MP.
The date of announcement is still unconfirmed, but it is expected that it will be announced very soon.