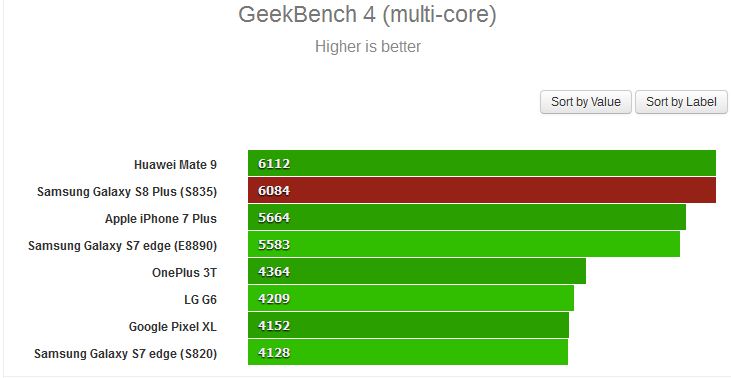 The upcoming smarphone Samsung Galaxy S8+ with model number SM-G955U powered by a MSM8998 Snapdragon 835 chipset spotted on Geekbench listing showing the impressive score (just below the Huawei Mate 9) gained on multi-core with 6084 and 1929 on single-core processor(only lower than Apple iPhone 7 Plus), which is almost similar to the score it received last month on Snapdragon 835 processor .It scored 2004 on the Single-Core test and 6233 on the Multi-Core. 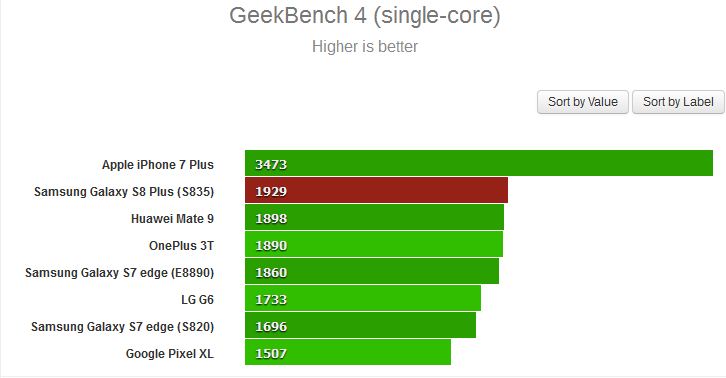 The device Samsung Galaxy S8 with a curved display will sport 5.8-inch and 6.2-inch QHD AMOLED display, 4GB RAM, internal storage capacity of 64GB, which can be further expanded via microSD card slot. It will be powered by Qualcomm Snapdragon 835 or Samsung Exynos 9 chipset and runs on Android 7.0 Nougat.
The smartphone Samsung Galaxy S8 with water resistance body will include a rear camera of 12MP with aperture f/1.7 and a front-facing camera of 8MP with f/1.7 aperture with iris-scanning capabilities. It’s rear camera will support optical character recognition (OCR). It will also feature Bixby virtual assistant that will use the camera for visual search.
It will feature 3.5mm headphone jack, USB Type-C connector and will also support the 3.5mm audio headphone jack, primary microphone, loudspeaker grills and antenna bands. It will be powered by a 3000mAh battery.

The other model Samsung Galaxy S8+ will come with 6.2-inch Quad HD curved Super AMOLED pressure sensitive display with the resolution of 2560×1440 pixels, 4GB / 6GB RAM, internal storage capacity of 32/64GB, which can be further expanded via microSD card slot. It is powered by Qualcomm Snapdragon 835chipset or Octa Samsung Exynos 8895 processor and runs on Android 7.0 (Nougat).It will come with Dual- SIM functionality. It will come with IP68 certification which will make it water and dust resistance.
The camera section of the device will include a rear camera of 12MP with LED Flash, f/1.7 aperture and a front-facing camera of 8MP with f/1.7 aperture. The device will support 3.5mm headphone jack, Heart rate sensor, Fingerprint sensor, Barometer.
Connectivity wise, it will feature 4G VoLTE, Wi-Fi 802.11ac, Bluetooth 4.2 LE, GPS with GLONASS, USB 2.0, NFC. It is powered by 3500mAh battery with fast Charging both on wired and wireless (WPC and PMA) charging. It will be powered by a battery of 3500mAh.
There is expectation that the users will get Samsung Galaxy S8 with a 5.8-inch display at €799 (US$ 850 / Rs. 56830 approx.) while the company will make available the other model Samsung Galaxy S8+ will at the cost €899 (US$ 956 / Rs. 63,947 approx.) and it will start the sale of both the devices from 21st April, 2017.