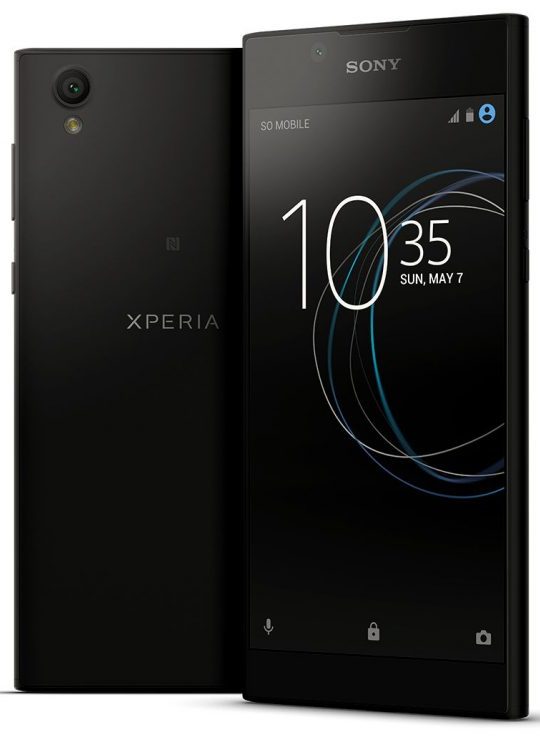 After the announcement of four new smartphones namely Xperia XZ Premium, Xperia XZs, Xperia XA1, and Xperia XA1 Ultra in 2017, the company finally announced one more smarthphone Sony Xperia L1. Since, it has already received the certification by telecommunication regulatory in Russia. It is the successor of the Sony Xperia L, which was announced in May, 2013.
The smartphone Sony Xperia L1 comes with narrow side bezels and sports HD display of 5.5-inch with the resolution of 1280 x 720 pixels. It has 2GB RAM, internal storage capacity of 16GB, which can be further expanded up to 256GB via microSD card slot. It is powered by 1.45GHz Quad-core MediaTek MT6737T 64-bit Processor with Mali T720 GPU and runs on Android 7.0 (Nougat).It has the dimension of 151 x 74 x 8.7 mm and weighs 180g.
The camera section of the device includes a 13MP autofocus rear camera with LED Flash, f/2.2 aperture and a front-facing camera of 5MP with f/2.2 aperture.
Connectivity wise, it features 4G LTE, WiFi 802.11 b/g/n, Bluetooth 4.2, GPS + GLONASS, NFC, USB Type-C and supports 3.5mm audio jack, FM Radio. It is powered by 2620mAh battery with Qnovo Adaptive Charging.
The company will make it available in single and Dual-SIM versions depending on the markets demand.

The users will get the device Sony Xperia L1 in Black, White and Pink colors. The cost of the device is still not declared by the company yet. Also Sony has decided to start the sale of the smartphone Sony Xperia L1 in the markets of North America in April of this year.
The predecessor Sony Xperia L features a 4.30-inch touchscreen display with a resolution of 480 x 854 pixels at 228 PPI of 228 pixels per inch. It comes with 1GB RAM, internal storage capacity 8GB, which can be further expanded up to 32GB via a micro SD card slot. The Sony Xperia L is powered by 1GHz dual-core MSM8230 processor and runs on runs Android 4.1. It has the dimension of 128.70 x 65.00 x 9.70mm and weighs 137.00 grams.
Sony Xperia L includes an 8MP rear camera and a front-facing camera of 0.3MP.It is a single-SIM smartphone.
Connectivity wise, it features Wi-Fi, GPS, Bluetooth, NFC, FM and 3G and also includes Compass Magnetometer, Proximity sensor, Accelerometer and Ambient light sensor.