Xiaomi Redmi Pro 2 will be launched this month 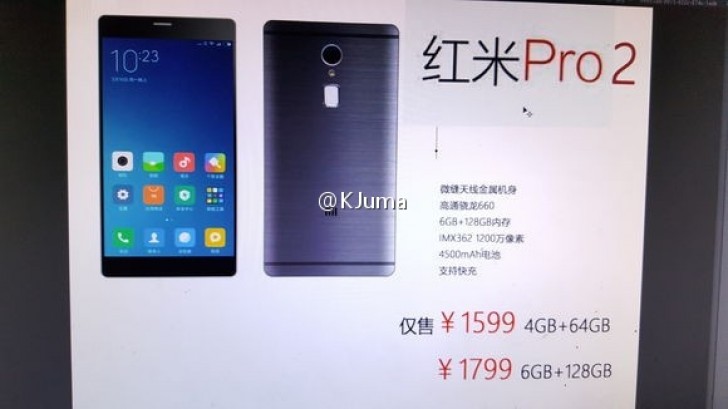 The latest smartphone from the Chinese smaertphone manufacturer Xiaomi namely Xiaomi Redmi Pro 2 is likely to be launched this month. It will be the successor of the Xiaomi Redmi Pro that was announced in July, 2016.
According to the latest rumor, the Xiaomi Redmi Pro 2 will be powered by MediaTek Helio P25 processor. There was expectation that it will be powered by Snapdragon 660 chipset, and will sport a rear camera of 12MP with the Sony IMX 362 sensor.
The earlier leaks revealed that the device Xiaomi Redmi Pro 2 will come with 2.5D curved glass and the company will make it available in two versions including 4GB RAM with 64GB internal storage capacity and 6GB RAM with 128GB inbuilt storage capacity.
The cost of the device is still confirmed, but there is expectation that the 4 GB RAM version will come with the cost CNY 1,599 (approx. Rs. 15,300) while the 6GB RAM version will be available at CNY 1,799 (approx.Rs. 17,200).

Recall its predecessor Xiaomi Redmi Pro which sports Full HD OLED display of 5.5” with the resolution of 1920 x 1080pixels, pixel density of 342ppi, 3GB / 4GB RAM, and 2.5D curved glass. It has internal storage capacity of 64GB / 128GB. It is powered by Deca-Core MediaTek Helio X25 processor with Mali-T880 MP4 GPU and runs on Android 6.0 Marshmallow with MIUI 8. It supports Fingerprint sensor and dual-SIM functionality. It comes with the dimension of 151.5×76.2×8.15mm, and weighs 174 grams.
It is powered by 2.5GHz deca-core MediaTek Helio X25 SoC chipset coupled with a Mali-T880 GPU, that’s available on the 4GB RAM /128GB storage variant, while the 3GB RAM / 64GB storage variant has the same processor clocked at 2.3GHz.There is also another version which is powered by a 2.1GHz deca-core MediaTek Helio X20 SoC as well.
The camera section of the device includes dual rear camera with a 13MP Sony IMX258 sensor with a 5-lens module, an f/2.0 aperture and PDAF autofocus, coupled with a 5-megapixel Samsung (unspecified) sensor for the secondary depth-sensing camera. It also comes with front-facing camera of 5MP with an 85-degree wide-angle lens and an f/2.0 aperture.