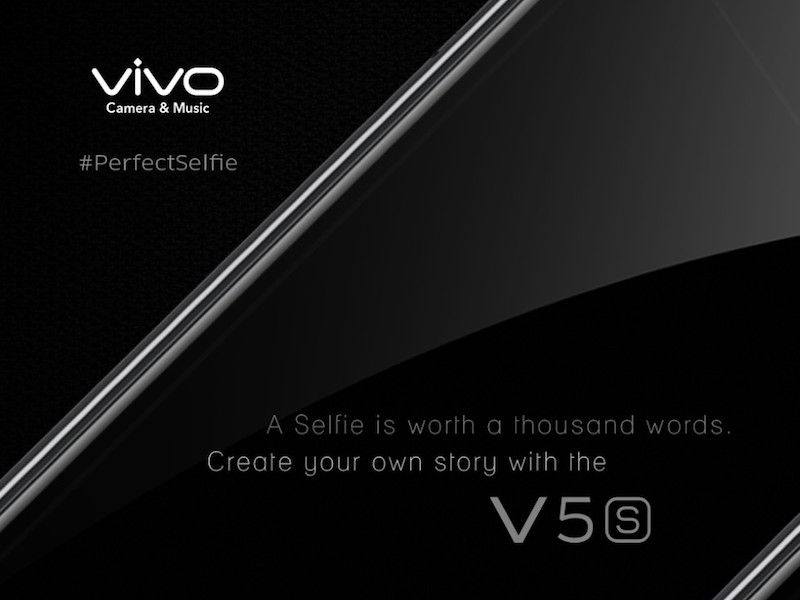 The Chinese smartphone manufacturer Vivo sent out the invites for the launching of the upcoming selfie –focused smartphone Vivo V5s in India on 27th April, 2017. It will be the successor of the Vivo V5 that was launched in India on November, 2016. The specifications of the device are still unconfirmed officially, but there is expectation that it will have many similarities to its predecessor.
The Vivo V5s will have metal unibody design and will sport a 5.5-inch HD display and a 2.5D curved Corning Gorilla Glass on top. It will feature 4GB RAM, internal storage capacity of 64GB, which can be further expanded up to 128GB via MicroSD card slot. It will be powered by MT6750 chipset and runs on Android 6.0 Marshmallow based on FunTouch OS 2.6. It will come with the dimension of 153.8×75.5×7.55mm and weigh 154 grams. The device will come with dual-SIM functionality.
The camera section of the device will include a front-facing 20-megapixel Sony IMX376 sensor with f/2.0 aperture and LED flash and a rear camera of 13MP with PDAF and f/2.2 aperture. Connectivity wise, the Vivo V5s include 4G LTE, Wi-Fi, Bluetooth, GPS, 3.5mm port, and a Micro-USB 2.0 port.
The users will get the device in a Matte Black, Space Grey, Gold, and Rose Gold color variants.The cost as well as the confirmed details related to the device Vivo V5s will be known on its launching.

Its predecessor Vivo V5 is the selfie-centric phone which comes with a 20MP front-facing camera with Sony IMX376 1/2.79″ sensor, f/2.0 aperture and 5p lens. It also comes with ‘Moonlight Glow’ which produces a natural glow on the face that light up the picture in respect of low or dim lighting conditions. This feature allows the users to take perfect selfies in various lighting conditions.
The device Vivo V5 sports HD display of 5.5” with the resolution of 1280 x 720 pixels and comes with 2.5D Corning Gorilla Glass protection. It has 4GB RAM, internal storage capacity of 32GB, which can be further expanded up to internal memory, expanded upto 128GB. It is armed with an Octa-Core MediaTek MT6750 64-bit processor and runs on Android 6.0 (Marshmallow) with Funtouch OS 2.6. It has the dimension of 153.8 x 75.5 x 7.55mm and weighs 154g.