Alcatel Idol 5 again spotted on GFXBench, but with different specs 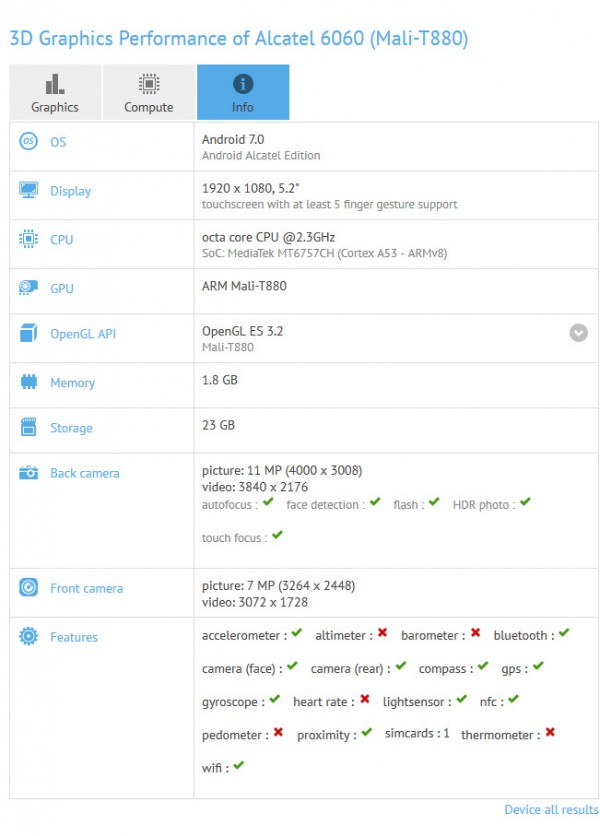 For your information the former GFXBench listing for the device Alcatel Idol 5 revealed that it will feature 5.2-inch display with Full HD resolution, 3GB RAM, internal storage capacity of 32GB. It will be armed by Qualcomm Snapdragon 625 chipset with eight Cortex A53 cores, clocked at 2 GHz along with Adreno 506 GPU and runs on Android 7.1.1 Nougat. The camera section of the device will include a rear camera of 12MP and a front-facing camera of 8MP.

While this time the smartphone Alcatel Idol 5 will sport a 5.2-inch display with the resolution of 1080pixels, 2GB RAM. It will be powered by Mediatek Helio P20 with a Mali-T880 GPU and will run on Android 7.0. It will feature a rear camera of 12MP which will come with 4K recording and a front-facing camera of 8MP.

Recall the predecessor Alcatel Idol 4 sports Full HD IPS LTPS display of 5.2” with the resolution of 5.2” with the resolution of 1920 x 1080 pixels, Precog UI (Touchless control), Live UI, Parallax UI. It comes with 3GB RAM, internal storage capacity of 16GB, which can be further expanded up to 512GB via microSD card slot. It is armed by Octa-Core Snapdragon 617 processor with Adreno 405 GPU and runs on Android 6.0 (Marshmallow). It has Hybrid dual SIM functionality. It has the dimension of 147×72.5×7.1mm and weighs 135g.
The camera section of the smartphone Alcatel Idol 4 includes a 13MP rear camera with dual-tone LED Flash, f/2.0 aperture, PDAF, EIS and a front-facing camera of 8MP with LED flash, 1.12um pixel size, 84-degree wide-angle lens.