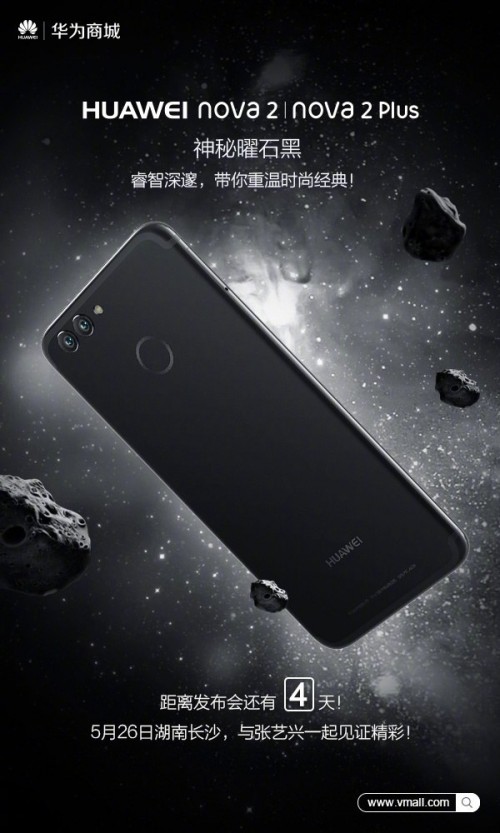 Earlier of this month, the upcoming smartphone Huawei nova 2 spotted at TENAA and also in recent days, the device leaked in posters and revealed its announcement which will be held on 26th May, 2017. Now a teaser image of the device unveiled that it will also available in Obsidian Black color just two days before its announcement.
It also confirmed that Huawei nova 2 will be launched in Changsha, Hunan province, China in three days. The device will also come in Blue, Green, and Pink colors as leaked earlier in posters starring Chinese pop-star Zhang Yixing who will announce the smartphone Huawei nova 2 officially.

According to the latest rumor, the device Huawei nova 2 will sport a display of 5.2-inch 2.5D glass embedded on its touchscreen, 4GB RAM. It will be armed with Snapdragon 660chipset.
The camera section of the device Huawei nova 2 will include a front-facing camera of 20 MP and a dual rear camera of 12 MP. It will be backed up by a battery of 3,000 mAh , which will support 18W fast charging.

The cost of the device is still unconfirmed, but it is expected that it will be priced at around CNY 2500 ($362).