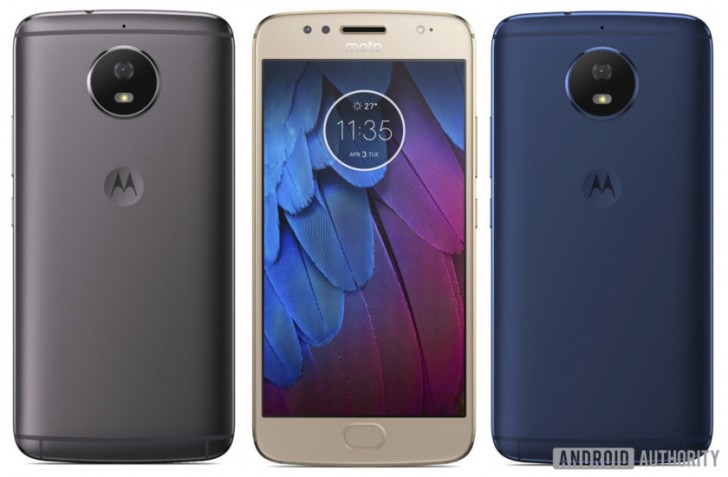 The latest upcoming smartphone Motorola Moto G5S is likely to introduce in coming days, as the device revealed in three different colors such as gray, gold, and dark blue via Android Authority.
The leaked image of the smartphone Moto G5S shows similar design to its predecessor Moto G5 that was launched last month in India. There may be difference in its body-built compare to its predecessor Moto G5. As there is expectation that Moto G5S will have metallic body while Moto G5 has semi-metallic body with aluminum back plate enclosed by plastic. As you know, the smartphone Motorola Moto G5 sports a Full HD display of 5-inch with the resolution of 1920 x 1080 pixels, it has Corning Gorilla glass 3 protection. It comes with 3GB RAM, internal storage capacity of 16GB, which can be further expanded up to 128 GB with microSD card slot. It is powered by 1.4GHz Octa-Core 64-bit Snapdragon 430 (MSM8937) processor with Adreno 505 GPU and runs on Android 7.0 (Nougat). It has dual-SIM functionality and comes with the dimension of 144.3x73x9.5 mm and weighs 144.5g. It has a fingerprint sensor embedded into the home button and also has water repellent nano-coating.The Moto G5 has a removable back cover as well as a removable battery.
The camera section of the smartphone Motorola Moto G5 includes a rear camera of 13MP with LED flash, PDAF, f/2.0 aperture, 1080p video recording and a front-facing camera of 5MP with OmniVision OV5693 sensor, f/2.2 aperture.
Connectivity wise, it features 4G VoLTE, WiFi 802.11 a/b/g/n ((2.4 & 5 GHz), Bluetooth 4.2, GPS and also supports 3.5mm audio jack, FM Radio. It is powered by 2800mAh battery with rapid charging.