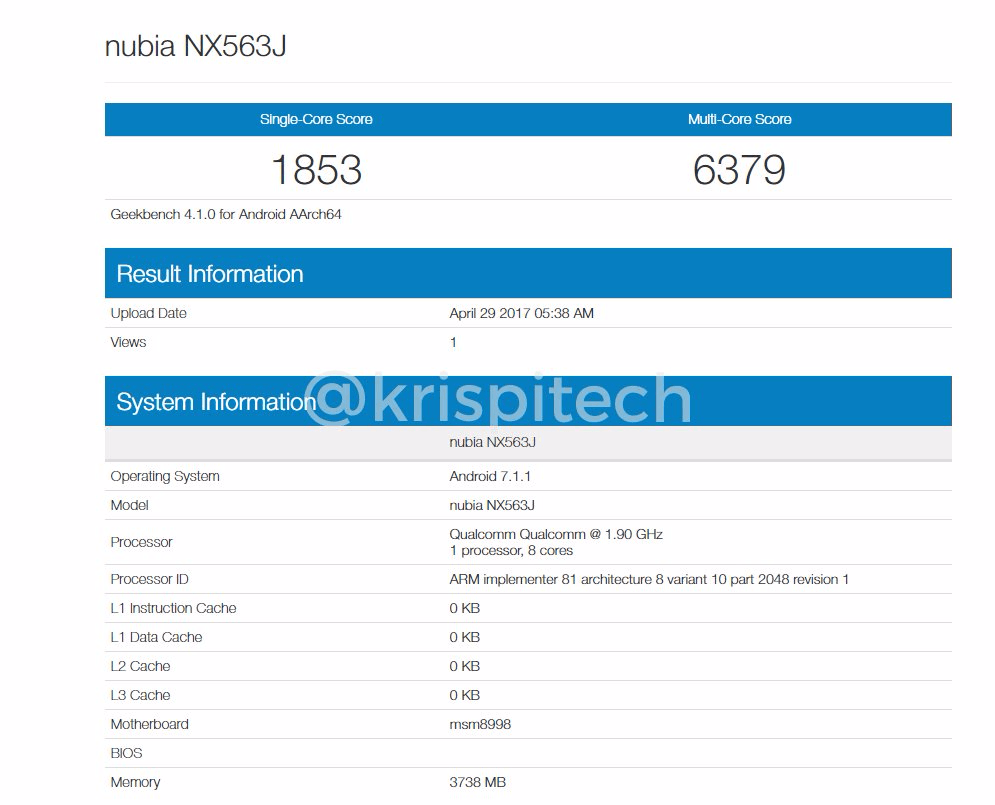 The Chinese smartrphone manufacturer already launched the device ZTE Nubia Z17 Mini in the early of April, 2017. Now the premium version Nubia Z17 with the model number Nubia NX563J is preparing for its announcement and hence in this regard, it has been spotted at Geekbench listing and revealed its specifications. Such information is leaked via tipster Krispitech.
According to the Geekbench listing, the upcoming device Nubia Z17 will come with 4GB RAM. It will be armed by Snapdgraon 835 octa-core processor of 1.90GHz and runs on Android 7.1.1 Nougat. Except, these we have no much information related to the unannounced device Nubia Z17. There is also expectation that it will feature rear dual cameras and a rear mounted fingerprint scanner.

Recall its predecessor ZTE Nubia Z17 mini sports 5.2-inch Full HD 2.5D curved glass display, 4GB / 6GB RAM, internal storage capacity of 64GB, which can be further expanded up to 2TB via microSD card slot. It is powered by Octa Core Snapdragon 653 / 652 processor and runs on Android 6.0 Marshmallow with Nubia UI 4.0. It has a Fingerprint sensor on its back and comes with Hybrid Dual –SIM functionality. It equips a 2950mAh battery with fast charging support.
The camera section of the device features dual rear cameras of 13MP with f/2.2 aperture, Sony IMX258 sensor, OIS, 4K video recording and a front-facing camera of 16MP with f/2.0 aperture, 80-degree wide-angle lens.