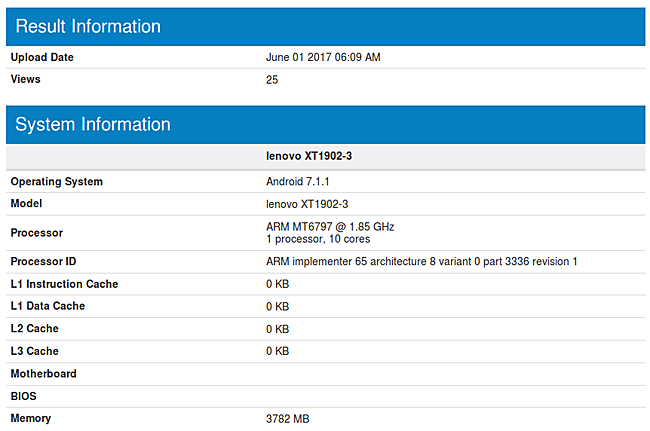 A latest smartphone from Lenovo with model number Lenovo XT1902-3 spotted on Geekbench and revealed its specifications.
According to the listing, the device will sport 4GB RAM. It will be armed with a MediaTek MT6797 chipset (also known as Helio X20 chipset) with the processor of 1.85GHz and will run on Android 7.1.1 Nougat OS. Hence except these, we have no much detailed specifications related to the device.
We except that the Lenovo XT1902-3 is likely to be Motorola Moto M2, hence if our supposition is correct than it will the successor of the Motorola Moto M that was announced in November, 2016.

As you know, the Motorola Moto M smartphone sports a 5.50-inch touchscreen display with a resolution of 1080 x1920 pixels at 401 PPI. It has 3GB RAM, internal storage capacity of 32GB, which can be further expanded up to 128GB via a microSD card. It comes with the dimension of 151.35 x 75.35 x 7.85mm and weighs 163.00 grams.
The Motorola Moto M is armed by 2.2GHz octa-core MediaTek Helio P15 processor and runs on Android 6.0.1.
It has a rear camera of 16MP and a front-facing camera of 8MP.
Connectivity options, it features Wi-Fi, GPS, Bluetooth, USB OTG, 3G and 4G  including the Compass Magnetometer, Proximity sensor, Accelerometer, Ambient light sensor and Gyroscope.