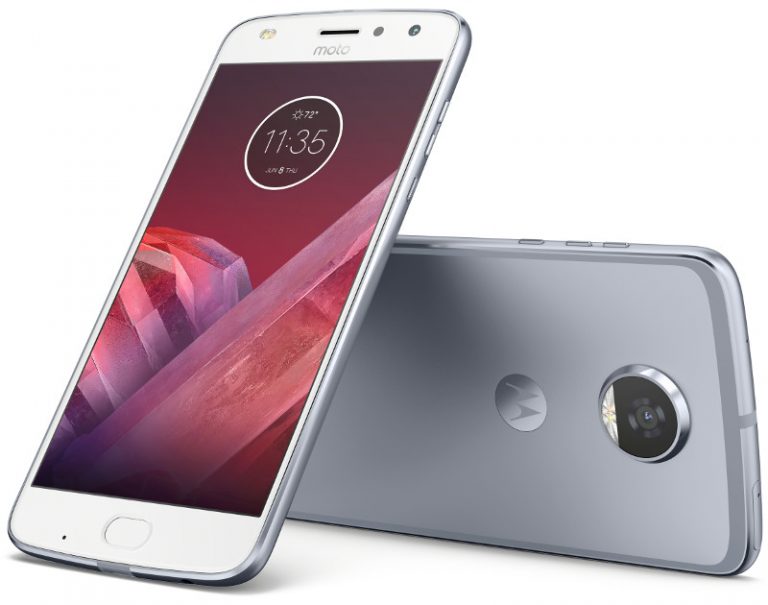 The smartphone Moto Z2 Play supports Moto Mods connectors which transform the phone into an entirely new device with a super-zoom camera, aboomboix, a projector and lots more. Moto Mods snap easily onto any Moto Z Phones.
It comes in a fabric body and has water-repellent coating, which makes it safe from water drops. Moto has introduced new JBL SoundBoost 2 mod with 10 hours of playtime built right into it.

The camera section of the smartphone Motorola Moto Z2 Play features a rear camera of 12MP with dual-tone LED flash, Dual-Pixel Autofocus, Laser Auto focus, f/1.7 aperture, 4K video recording and a front-facing camera of 5MP with f/2.2 aperture, dual-tone LED flash.
Connectivity wise options, includes  4G VoLTE, WiFi 802.11a/b/g/n (2.4 GHz + 5 GHz), Bluetooth 4.2 LE, GPS, NFC, USB 3.1 Type-C and it is back up by a 3000mAh battery with Turbo charging. There is also a new TurboPower mod that has 15W fast charging built into it. It can charge the phone up 50% in just 20 minutes says the company.

The users can get the device Motorola Moto Z2 Play in Lunar Gray, Nimbus Blue and Fine Gold colors. The cost of the device is still not declared by the company yet. Also the company will make pre-booking offers such as interest-free EMIs for 10 months, for those users who will pre-order the phone for Rs. 2000,will get free Moto Armor Pack that comes with protective accessories and offers on Moto Mods. The cost of the smarphone along with the accessories including new Moto TurboPower Pack Mod, Moto Style Shell with Wireless Charging will be known on its announcement.

For your reference, the device Motorola Moto Z Play sports a display of 5.50-inch with a resolution of 1080 x 1920 pixels at 403ppi. It has 3GB of RAM, internal storage capacity of 32GB, which can be further expanded up to 2000GB via a microSD card. It comes with the dimension of 156.40 x 76.40 x 6.99mm and weighs 165grams. It has dual-SIM functionality. It is powered by 2GHz octa-core Qualcomm Snapdragon 625 processor and runs on Android 6.0.1.
It comes with a rear camera of 16MP and a front-facing camera of 5MP and backed up by a battery of a non removable battery 3510mAh.
Connectivity options , the device Motorola Moto Z Play features a Wi-Fi, GPS, Bluetooth, NFC, USB OTG, Headphones, 3G and 4G and also supports sensors including Compass Magnetometer, Proximity sensor, Accelerometer, Ambient light sensor and Gyroscope.