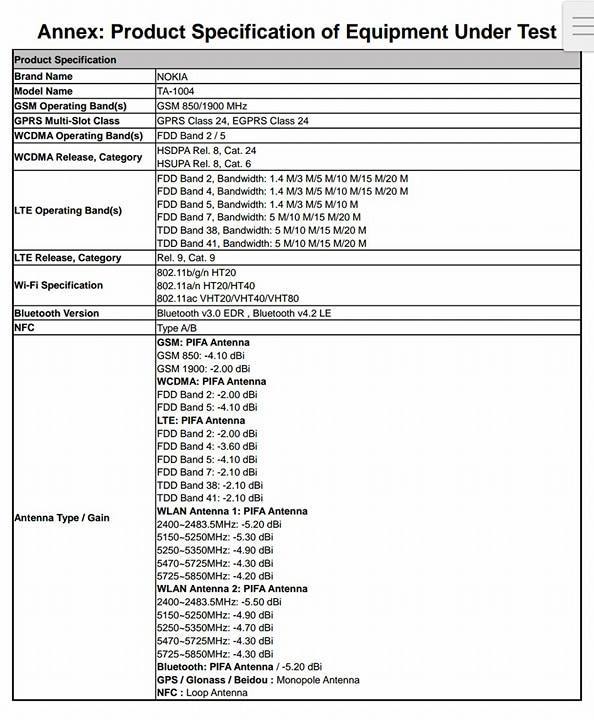 Earlier of this month, the upcoming flagship smartphone Nokia 9 spotted on AnTuTu with leaked specifications. Now the unannounced device Nokia 9 with the model number TA-1004 moves one step forward and received FCC certification. Yet the FCC listing hasn’t revealed much detail related to the device, except the information about its connectivity including NFC and Bluetooth 4.2 support. Since, the device Nokia 9 already showed its presence on GeekBench benchmark.

According to the latest rumor, the smartphone Nokia 9 will sport 5.3-inch Quad HD display with the resolution of 2560×1440 pixels, 4GB/6GB RAM, internal storage capacity of 64GB, which can be further expanded up to 256GB via microSD card slot. It is armed with Octa-Core 1.90GHz Snapdragon 835 processor with Adreno 540 GPU and runs on Android 7.1.1 (Nougat). A Fingerprint sensor is likely to be embedded in its home button. It will have Water and Dust resistant body.

The camera section of the smartphone Nokia 9 will feature a dual rear camera including 13MP (RBG) and 13MP (Monochrome) with dual-tone LED Flash, OIS, EIS 3.0, 4K video recording and a front-facing camera of 8/12MP. Connectivity wise options, it will include Bluetooth 4.2, Wi-Fi 802.11 b/g/n ac, NFC support and GPS.