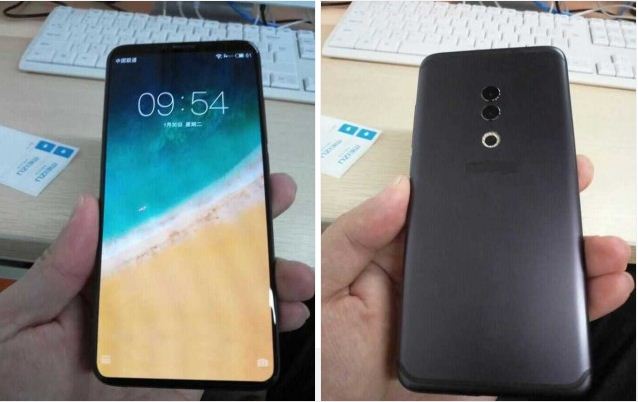 The smaller version Meizu 15 was spotted recently in renders and now the live images of the upcoming smartphone Meizu 15 Plus hit the web and showed its rear and front panel. The leaked design also revealed that it will come with non-existent bezels on three sides and will have a vertical dual camera setup with a 10-LED flash on its rear chassis as placed on the Meizu Pro 6 Plus. Neither side-mounted fingerprint scanner nor any type of sensor placed on its rear or front section.
Since, the unannounced device Meizu 15 Plus already leaked more times in the past and hints that it will come with bezel less on three sides of its screen along with curved corners on the top. It also revealed that a fingerprint sensor will be placed at the front either below its mBack button or under-the-screen. Hence, these are the information we have followed so far.

The cost of the lower version Meizu 15 will be CNY2,999/$450, while its higher version Meizu 15 Plus will be available at CNY3,499/$530. The date of its announcement is still not declared by the company yet. But for your information, the smartphone manufacturer Meizu has completed 15 years in the smartphone business and hence to memorize it, the manufacturer will celebrate the period with the announcement of the Meizu 15 Plus next year.

It is armed with Hexa-Core (2.0GHz x 2 Cortex-A73 + 1.6GHz x 4 Cortex-A53) Samsung Exynos 7872 14nm processor with Mali-G71 GPU and runs on Android 7.1.2 (Nougat) with Flyme OS 6.2. It has Dual- SIM functionality, dimension of 152 × 72.54 × 8mm and weighs 160g. It has a Super mBack fingerprint sensor on the right side that can unlock the phone in 0.2 seconds and is also customizable to perform several actions. There is a Halo button below the display that has pressure sensor to perform the same mBack actions.
The camera section of the device features 16-megapixel rear camera with f/2.0 aperture, dual-tone LED flash, 5P lens, CMOS sensor and an 8-megapixel front-facing camera with f/2.0 aperture.
Connectivity wise, it includes  4G VoLTE, Wi-Fi 802.11 a/b/g/n, Bluetooth 4.2, GPS + GLONASS. It is powered by 3000mAh battery with fast charging.