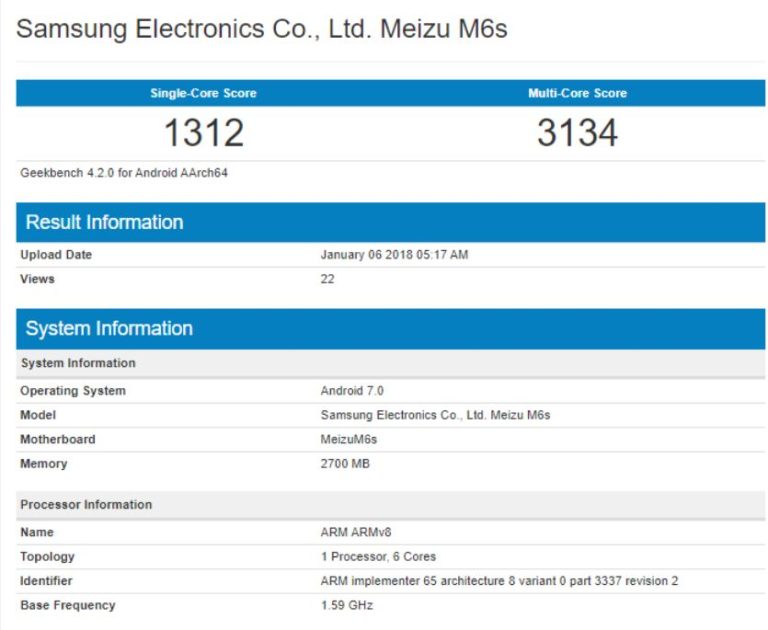 The upcoming smartphone Meizu M6s already gets the TENAA certification earlier of this month. Now the device spotted on Geekbench benchmark with the scoring of 1312 on single-core and 3134 in multi-core tests and proved its excepted arrival on 17th of this month. It will be the successor of the Meizu M5s that was announced in February this year.
According to the Geekbnch listing, the unannounced device Meizu M6s which is also known as the mblu or Blue Charm S6 will be powered by the Exynos 7872 and a MediaTek chipset, where there is expectation that it’s Exynos version will be arrived in its home while the global version will come with MediaTek-powered chipset.  The device will be powered by Exynos 7872 chipset with hexa-core design along with 3GB RAM and will run on Android 7.0 Nougat instead of Android 8.0.

The device Meizu M6s/ Blue Charm S will have 4GB RAM with 64GB storage and 3GB RAM with 32GB storage, which can be further expandable up to 128GB via microSD card slot. It will be powered by Samsung’s Exynos 7872 SoC, with a Mali-G71 CPU. The device will be backed up by a 2930 mAh battery with support for 18W fast charging. It will have a fingerprint sensor placed on the right side, under the button. It will come with the dimension of 152×72.54×8.0mm.
The camera section of the smartphone Meizu M6s will include a rear camera of 13MP and a front-facing camera of 5MP. It will come with a fingerprint scanner on the right side, below the power button.
Connectivity wise, it will include 4G VoLTE, Wi-Fi 802.11 a/b/g/n, Bluetooth 4.2, GPS + GLONASS.