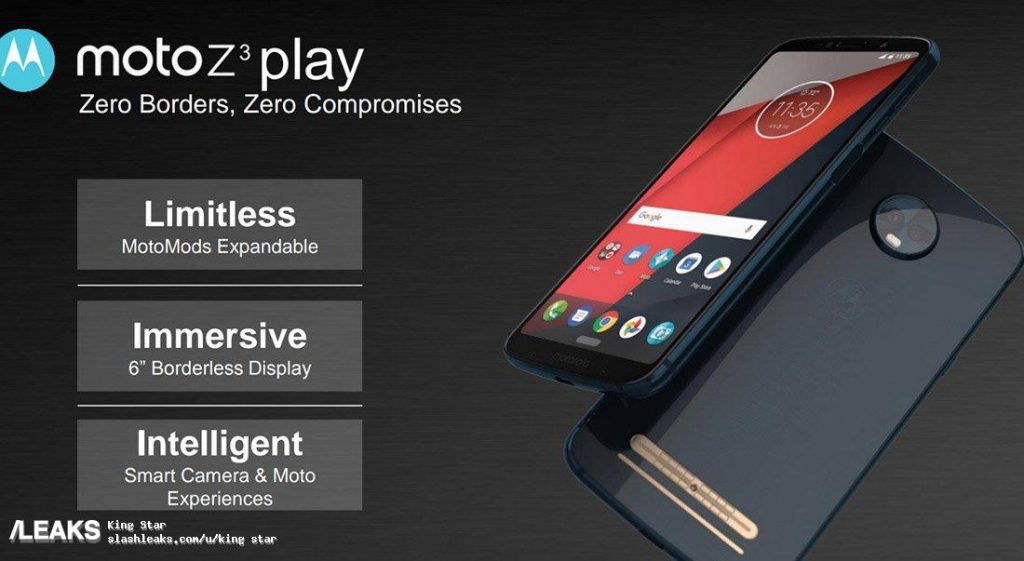 A render of the upcoming smartphone Motorola Moto Z3 Play revealed via slashleaks without any specification. The leaked render shows super-slim bezels and also suggests that the device will come with few changes in the design compare to its predecessors. It will be the successor of the Motorola Moto Z2 Play that was launched in June,2017.

As per rumor, the unannounced smartphone will sport a 6-inch Full HD+ display with the resolution of 1080 x 2220 pixels with an aspect ratio of 18:9. The fingerprint scanner can’t be seen, so there is probability that the smartphone manufacturer Motorola may replace it with facial recognition or the fingerprint scanner could be embedded under the screen.
The fingerprint scanner is not visible on the images of the Moto Z3 Play. There is a possibility that the company may replace it with facial recognition or it could be embedded under the screen under the Moto logo on the rear panel of the device Motorola Moto Z3 Play.
The device is likely to feature a Motorola 5G Moto Mod that will offer 5G connectivity to the phone. It will also include dual front-facing cameras. The date of its announcement is still not confirmed but it is expected that it will be announced in summer this year.

The predecessor Motorola Moto Z2 Play has an ultra-slim aluminum unibody design with water-repellent coating and has fabric body.
It sports 5.5-inch (1920 x 1080 pixels) Full HD Super AMOLED display with Corning Gorilla Glass 3 protection, 4GB LPDDR3 RAM with 64GB storage / 3GB LPDDR3 RAM with 32GB storage, expandable memory up to 2TB  via microSD card slot.
It is armed with  2.2GHz Octa-Core Snapdragon 626 processor with Adreno 506 GPU and runs on Android 7.1.1 (Nougat). It has the dimension of 156.2 x 76.2 x 5.99mm and weighs 145g and has Single / Dual SIM functionality. It has a Fingerprint sensor and also features JBL SoundBoost 2 mod with 10 hours of playtime.