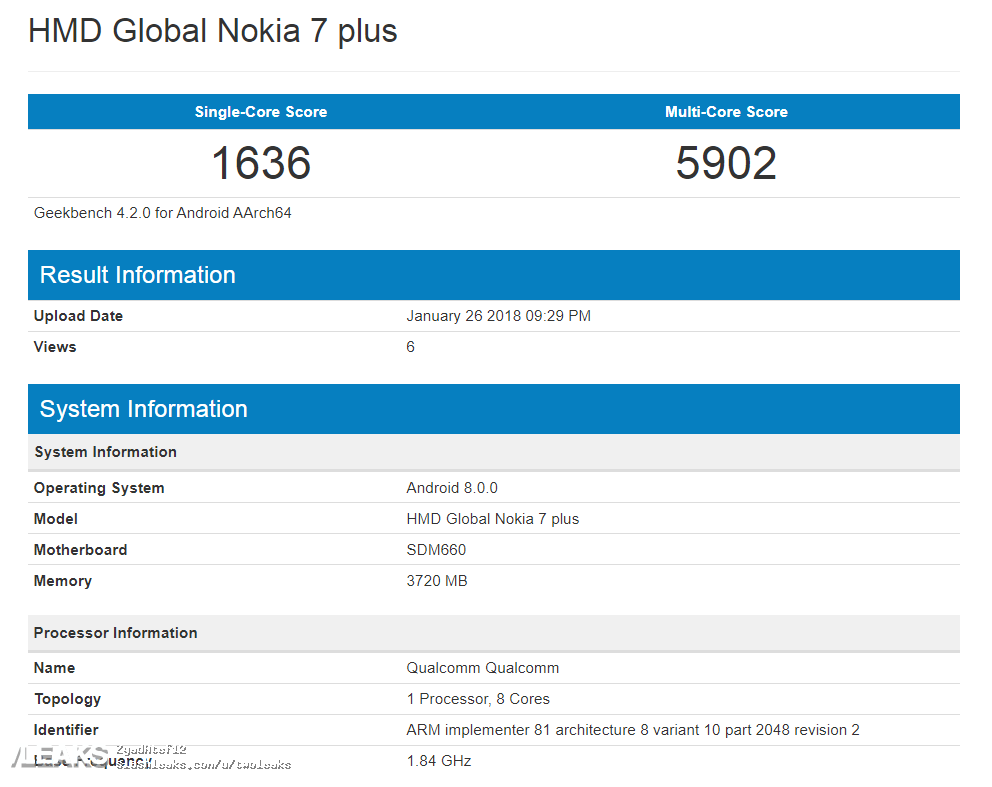 The HMD Global has already launched the smartphone Nokia 7 in China in October last year. Now the largest version of the Nokia 7 namely Nokia 7 Plus spotted on Geekbench and preparing for its launching in coming days. Till date not single information was leaked on the web related to it.
The Geekbench listing didn’t reveal much details except that the upcoming smartphone Nokia 7 Plus will have 4GB RAM. It will be armed with Qualcomm Snapdragon 660 octa-core processor and will run on Android 8.0.

Hence, we also expect that it will come with large display and will show a better performance by its processor. It has scored 1636 in the single-core test and gained 5902 at the multi-core test.

It will be only available for the Chinese markets but there is possibility that the company may announce its launching in global markets at MWC, 2018 event.
Since, the HMD Global is likely to announce the flagship device Nokia 9 at the event and also it will launch Nokia 1, Nokia 6, Nokia 7 and the Nokia 3310 4G globally at the same show, since these are already available in China yet.

The predecessor Nokia 7 sports a 5.2-inch IPS HD display with the protection of Corning Gorilla Glass 3. It has 4GB/6GB RAM, internal storage capacity of 64GB. It is armed with an octa-core Snapdragon 630chipset and runs on Android Nougat 7.1.1 which will be further upgradable to Android Oreo 8.0.
The camera section of the device includes a rear camera of 16MP ZEISS lens with f/1.8 aperture, along with a dual-tone LED flash and a front-facing camera of 5MP with f/2.0 aperture offers an 84-degree field of view. It also features a bothie camera, which allows the user to capture rear and front pictures in a single image at the same time.