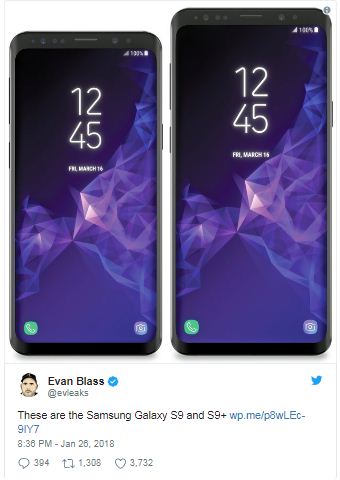 Few days ago, the tipster @evleaks was revealed that the smartphone manufacturer Samsung will announce the smartphones on 26th February and the shipment will start on 16th March, 2018. After that the company sent out the invites for the announcement of both the upcoming smartphones Samsung Galaxy S9 and Galaxy S9+ on 25th February at the Mobile World Congress 2018 in Barcelona next month and stopped all the rumors related to its announcement finally.

Now the first press images of both the devices surfaced on the web via the same reliable tipster @evleaks and revealed the front section the devices with infinity display, minimal bezels and sensors on its top. Since, it showed much similarity in design to the smartphones of S8 series.

According to the latest rumor, the smartphone Samsung Galaxy S9 will sport Super AMOLED panel with 5.8-inch display Quad HD+ resolution (1440 x 2960 pixels), 4GB RAM, internal storage capacity of 64 GB, which can be further expanded up to 256GB via microSD card slot. It will be powered by Qualcomm Snapdragon 845chipset with Octa-core processor and runs on Android 8.0(Oreo).The device will have IP68 ratings, Water & Dust Resistant body.
The camera section of the device Samsung Galaxy S9 will feature a front-facing camera of 8 MP with AF and a rear camera of 12MP with variable aperture f/1.5 / f/2.4.It will shoot Super Slow-mo videos, will come with stereo speakers, tuned by AKG. It will support wireless charging and will come with AKG earphones.

While the other unannounced smartphone Samsung Galaxy S9+ will sport 6.20-inch touchscreen display with a resolution of 1440 x 2960 pixels at 531 PPI. It will have 6GB RAM, 64GB of internal storage that can be expanded up to 256GB via a microSD card. It will have the dimension of 157.7 x 73.8 x 8.5 mm. It will be powered by Snapdragon 845 chipset and will run on Android 8.0 Oreo. It will have dual-SIM functionality.

The camera section of the device Samsung Galaxy S9+ will include a dual rear camera of 12MP positioned vertically and a front-facing camera of 8MP for capturing selfies. Hence, it will be the first Galaxy model to feature a dual rear camera.
The device Samsung Galaxy S9+ will come with 3.5mm headphone jack.  The headphone jack port will be placed on the USB Type-C cable component.
Connectivity wise, it will include Wi-Fi, GPS, Bluetooth, NFC, USB OTG, 3G and 4G.

The announcement of both the Samsung Galaxy smartphones will be held  at 6 p.m.CET (10:30 PM IST) in Barcelona on February 25, 2018 and the company will start the shipment on 16th March, as suggested by the press reports.