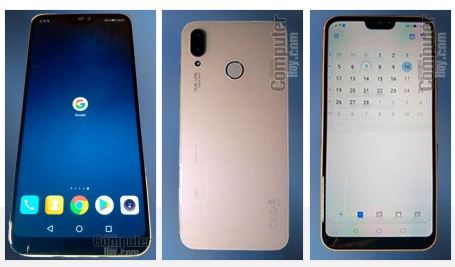 As you know the smartphone manufacturer Huawei is likely to announce at least three devices Huawei P11/P20, a P11/P20 Plus, and a P11/P20 Lite in coming days. Also there is expectation that the other model Huawei P11 or P20 (the name is still not confirmed) will be announced on 27th March at an event in Paris.
Now the upcoming flagship smartphone Huawei P20 Lite leaked in live images and revealed that it will come with vertical arrangement for the dual rear cameras, based on the iPhone X and shows the notch at the top of the screen.

The Huawei P20 Lite will sport display of 5.8-inch with 18:9 aspect ratio, which is different from as leaked by FCC certification recently.The leaked image shows the light pink and black color, a USB Type-C port on the bottom with a 3.5mm headset jack.
According to the certification, it will come with a display of 6.1-inch with the resolution of 2280 x 1080pixels with 19:9 aspect ratio, dimension of 148 x 71 x 7.2 mm. Its body will be made with the combination of metal and glass just like sandwich variety. It will be either armed with Kirin 970 SoC chipset or the updated version of the Kirin 659chipset and will run on Android Oreo. The device will be powered by 2,900 mAh battery.

Also a number of rumors and reports about the upcoming smartphone Huawei P11 have already made the rounds of the web that the device Huawei P11 will be announced in April at an event in Europe.

The device Huawei P11 will come with three camera sensors in the rear of the device which will help the users to take images up to 40MP in resolution with 100% extra light and better stabilized night shots. The rear camera setup will also have features like 5x “Hybrid Zoom” technology. The device will come with 40-megapixel triple-lens Pro camera certified by Leica and a Leica branded 24-megapixel front-facing camera. It will be powered by the Kirin 970 chipset and will also feature a dedicated Neural Processing Unit (NPU) for handling AI tasks. It will have a 6.01-inch display with codenamed as EMILY.