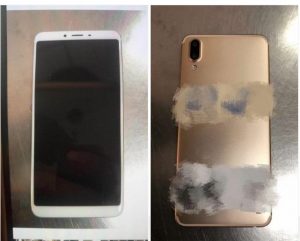 Earlier of this month, the image of the upcoming smartphone Meizu E3 was leaked in gold color on the Chinese social networking website, Weibo and revealed that it will have all-metal unibody design with a dual camera setup. The leaked image was also suggested that it will come with the dual camera setup with a ring LED flash, antenna stripes near the very top and bottom edges.
Now the live images of the unannounced smartphone Meizu E3 revealed that it will come with a side-mounted fingerprint scanner as placed in the existing device Meizu M6s and also shows rear dual camera in a vertical position. It’s front is likely to have a tall 18:9 display. The leaked image via a Weibo leakster shows the smartphone with and without a protective case and revealed that it is preparing to come with a speaker, 3.5 mm jack and USB-C port on the bottom while the volume rocker and the SIM tray will make its place on the left side. The fingerprint sensor and the power button will be situated on its right side.
The exact cost of the device is still not confirmed, but it is expected that it will be available at CNY2, 000 ($320 or €257). The Meizu E3 will be the one of the device which is likely to be announced with six other models.

As for information, the Meizu E3 will be launched along with the device Meizu M6s in June 2018.

Its predecessor Meizu E2 features 5.5-inch LCD display with the resolution of 1920 x 1080 pixels. It is armed by 2.3GHz GHz MediaTek Helio P20 Octa-Core 64-bit 16nm processor with ARM Mali T880 GPU and runs on Flyme 6.0 based on YunOS. It has Hybrid Dual SIM functionality. It comes with the dimension of 153.7 x 75.7 x 7.5mm and weighs 155g.
The smartphone Meizu E2 comes in two versions , one with 3GB LPDDR4X RAM and 32GB internal storage while the other with  4GB LPDDR4X RAM with 64GB internal storage, which can be further expanded up to 128GB via microSD card slot.

It has mTouch fingerprint sensor embedded into the home button that can unlock the phone in just 0.2 seconds and can also be used for secure payments.
The camera section of the device Meizu E2 features a rear camera of 13 MP with 4-LED dual tone Flash, f/2.2 aperture, PDAF and a front-facing camera of 8MP with f/2.0 aperture, 1.4μm pixel size.
Connectivity wise, options it includes 4G VoLTE, WiFi 802.11 a/b/g/n (2.4/5 GHz), Bluetooth 4.2 LE, GPS, GLONASS and it is backed up by 3400mAh battery with fast charging.