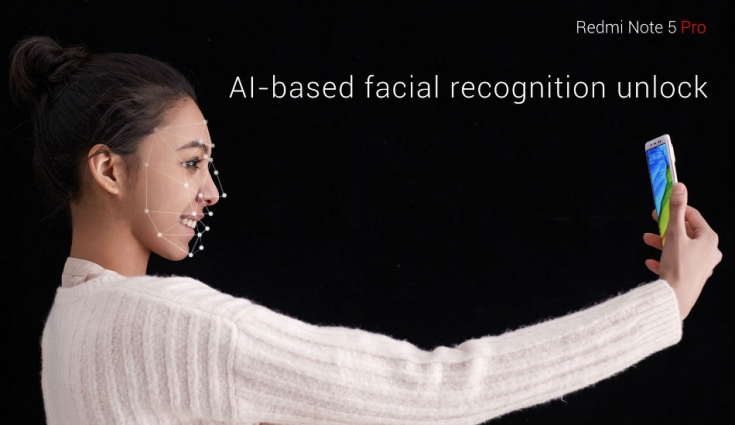 The Chinese smartphone manufacturer finally kept its promise and rolled out the first time the latest and advanced Face Unlock feature via an (OTA) Over The Air update on its newly launched budget smartphone Xiaomi Redmi Note 5 Pro. With the MIUI 9.2.4.0 OTA update, the company makes it the first device in India having the face unlock feature via an OTA. The OTA update will also improve the system stability. Till date, only the mid and high-end smartphones were offering such feature.
The Redmi Note 5 Pro costs  Rs. 13,999 for the 4GB RAM variant and Rs. 16,999 for the 6GB RAM variant.
This advanced feature allows the users to unlock the phone by just looking at the screen and also it will unlock the device in 0.2 seconds, as claimed by the smartphone company Xiaomi.
For the setup of the Xiaomi’s Face Unlock feature, the users can find this feature in ‘Lock screen & password’ under Settings menu. They have to first set a PIN, password, or lock pattern for more additional security after that they can add their facial data for security. For unlocking the device, the users have to press the power button for the lockscreen for few seconds.
At the meantime, the Xiaomi also suggested that “Face unlock is less secure than a PIN, password, or pattern. Your device might be unlocked with your photo, as well as by people or objects with similar appearance.”
For your information, fingerprint sensor technology is still the most safety producing for the smartphones compare to the facial recognition for smartphone security.
The tech giant Apple was first to implement this face recognition mechanism on its iPhone X which they call the Face ID.

The smartphone Xiaomi Redmi Note 5 Pro sports a 5.99-inch touchscreen display with a resolution of 1080 x 2160 pixels. It has 4GB/6GB RAM, internal storage capacity of 64GB, which can be further expanded up to 128GB via microSD card slot.
It is armed with 1.8GHz octa-core Qualcomm Snapdragon 636 processor and runs on Android 7.1.1. It has dual-SIM functionality, the dimension of 158.60 x 75.40 x 8.05mm and weighs 181.00 grams.
The camera section of the device Xiaomi Redmi Note 5 Pro includes a dual rear camera of 12MP+5MP and a front-facing camera of 20MP Sony IMX376for capturing selfies.
Connectivity wise, it features Wi-Fi, GPS, Bluetooth, USB OTG, FM, 3G and 4G including Compass Magnetometer, Proximity sensor, Accelerometer, Ambient light sensor and Gyroscope.