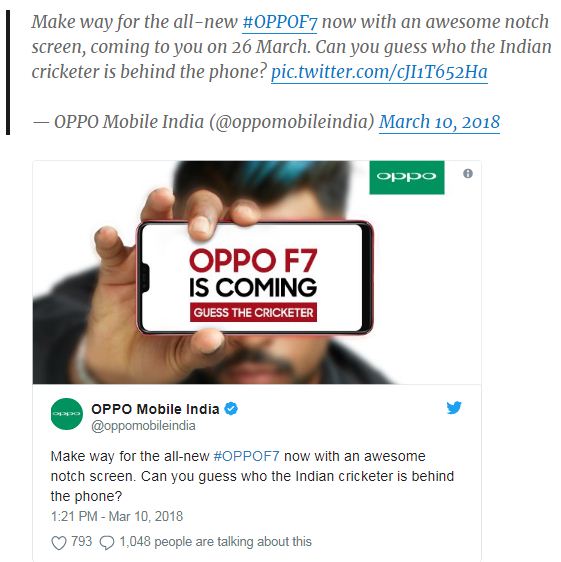 The smartphone manufacturer Oppo is preparing to announce its latest selife-focused smartphone Oppo F7, hence in this regard it has released the official teaser of the upcpoming device showing the full-screen display with a notch and minimal bezels.
The promotional image of the device teased the brand ambassador and asks the users to guess him. It hints the image of the Indian cricketer, which is likely Hardik Pandya. These all can be seen as a post on a Twitter by Oppo India .It has also confirmed that the device will be announced on 26th March without revealing a single specification. It is the successor of the Oppo F5 that was launched in Indian market in November last year at Rs.19990.

According to the latest rumor, the upcoming “Selfie Expert” Oppo F7 will sport a 6.2-inch FullHD+, 19:9 display with 89.09% screen-to- body-ratio. It will be powered either by Snapdragon 670 chipset or the MediaTek Helio P6 and will run on Android Oreo.
It will feature a massive front-facing camera of 25MP, which will make it totally dedicated for capturing awesome selfies. Its front camera will be backed with A.I. beauty recognition technology that scan 200 facial recognition spots to beautify a selfie shot perfectly and also offers bokeh effect. It also has face unlock feature to quickly unlock the phone.