OnePlus 6 with 8GB RAM, 256GB storage capacity will be announced in China on 17th May 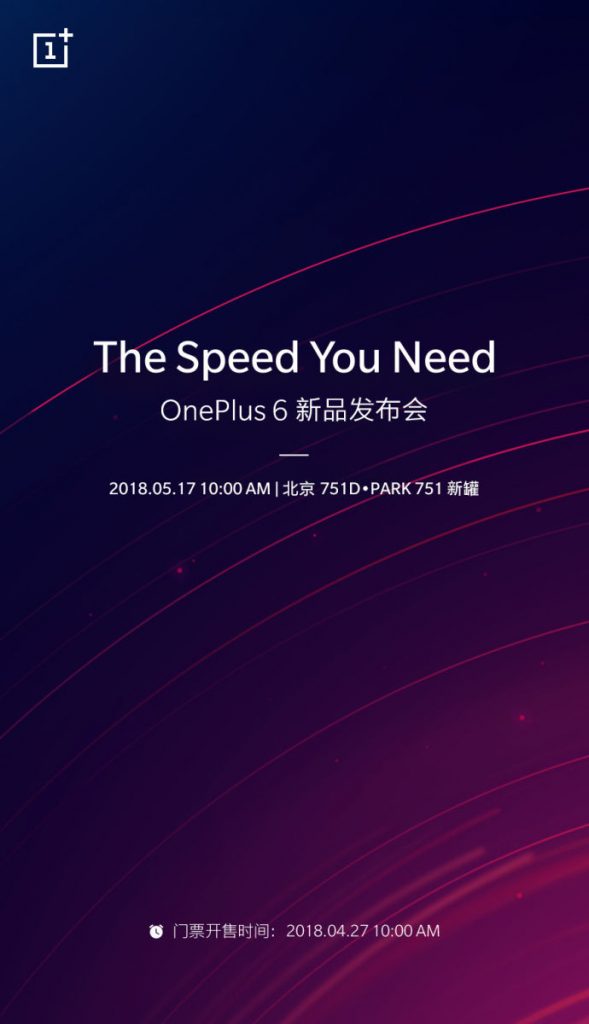 After sharing the sample images captured by OnePlus 6, now the Smartphone manufacturer finally declared its announcement and sent out the invites and the invitation comes with the catchline  “The Speed You Need” which hints its Snapdragon 845chipset and 8GB of RAM, which speed up the processing  of the device .
the the flagship smartphone OnePlus 6 will be announced on 17th May at an event in 751 D Park, Beijing  at 10AM China Time (7:30 AM IST). China.

According to the latest rumor, the device OnePlus 6 will have glass back with a 6.28-inch AMOLED screen with a resolution of 2280 x 1080pixels, 19:9 aspect ratio with a small notch on the top , 8GB RAM, internal storage capacity of 256GB. It will be powered by Snapdragon 845chipset with 2.7 GHz processor and will run on Android 8.1(Oreo). It will have rear-mounted fingerprint sensor. The device will have water and dust-resistant body, as teaser earlier.
The camera section of the device OnePlus 6 will include a vertical dual rear camera setup of 16MP + 20MP with f/1.7 aperture, LED flash and a front-facing camera of 20MP with f/2.0 aperture. It will be backed up by 3,450 mAh battery.

The company will also launch the device in the Indian market and it will be available to the users very soon via Amazon.in .