The company OpenSignal  that specializes in wireless coverage mapping, surveyed the 20 cities of India and crowned Patna , the capital of Bihar as the top most city for the availability of 4G connectivity over 92.61%. The city Patna beats and took the crown from Navi Mumbai which was the earlier topper  in terms of 4G speed with an average speed of 8.72 Mbps and Chennai was gained the second place with nearly 8.52 Mbps speed. 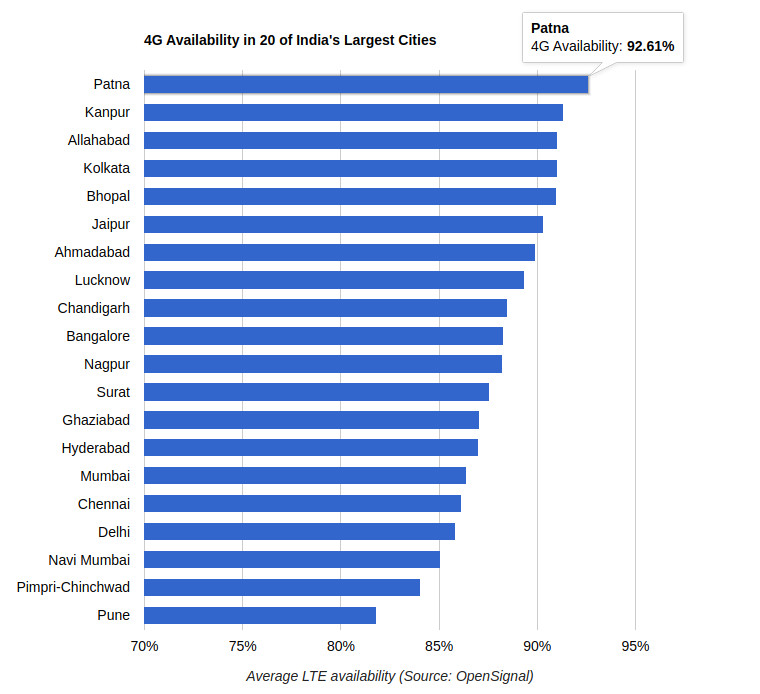 Now the current reports suggests that the topper Patna city is backed by Kanpur, Allahabad, Kolkata, Bhopal, and Lucknow. While the tech hubs like Bangalore, Delhi, Mumbai and Hyderabad showed 4G availability of 88.29%, 85.83%, 86.39% and 87% respectively.Since, all the 20 cities has achieved more than 80% 4G availability.

The report covered by OpenSignal  from December 1, 2017 for 90 days including the India’s 20 largest cities with the availability of 4G connectivity.

Overall, India is one of the fast emerging country in the world for using internet due to affordable and its easily reach in each hand.