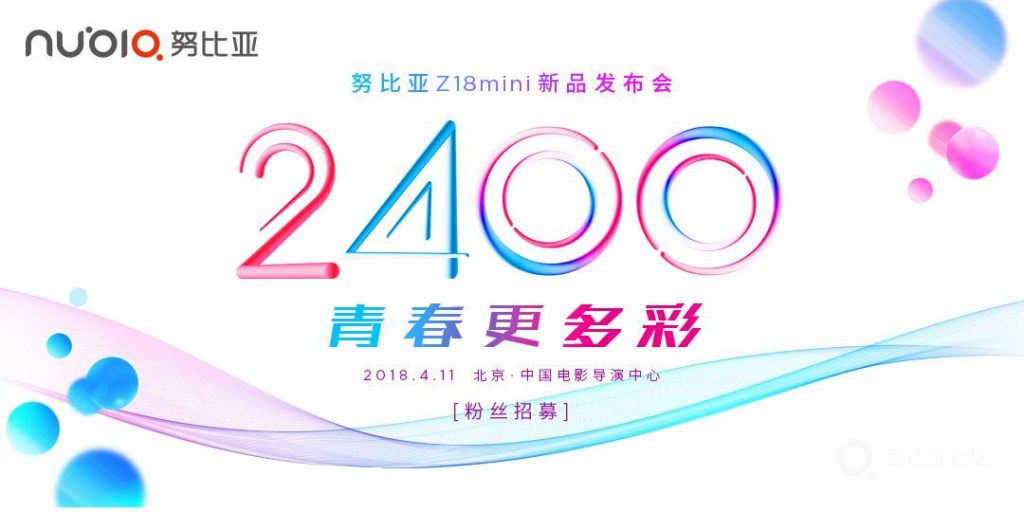 The smartphone manufacturer ZTE sent out the invites for the announcement of its latest and the first smartphone from its Z18 series  in Beijing, China. It will be the successor of the ZTE nubia Z17 Mini that was announced in April last year and was launched in Indian market in June at the same year at Rs.19999.
The released invite unveils not much details related to the device. It only shows 24OO, which makes us to think that either the smartphone will come with dual rear camera of 24MP or a front-facing camera of 24MP.

According to the latest rumor, the device ZTE nubia Z18 mini will have a unibody metal design with Full HD+ 18:9 aspect ratio screen, 6GB RAM. It will be powered by Snapdragon 660 SoC chipset and it will feature a rear-mounted fingerprint sensor.
The cost of the device ZTE Nubia Z18 mini is still not declared but it is expected that it will be tagged around 1599 yuan (US$ 254 / Rs. 16,555 approx.).

It’s predecessor ZTE nubia Z17 Mini sports a 5.2-inch Full HD 2.5D curved glass display with the resolution of 1920 x 1080 pixels and also it has Corning Gorilla Glass protection. It has 4GB RAM, internal storage capacity of 64GB, which can be further expanded up to 200GB via microSD card slot. It has the dimension of 146.65 × 72.5 × 7.45mm and weighs 155g.
It is armed with Octa Core Snapdragon 652 processor with Adreno 510 GPU and runs on Android 6.0 Marshmallow with Nubia UI 4.0. It houses a Fingerprint sensor embedded on its back .It has a Hybrid Dual –SIM functionality. It is backed up by 2950mAh battery with fast charging support.