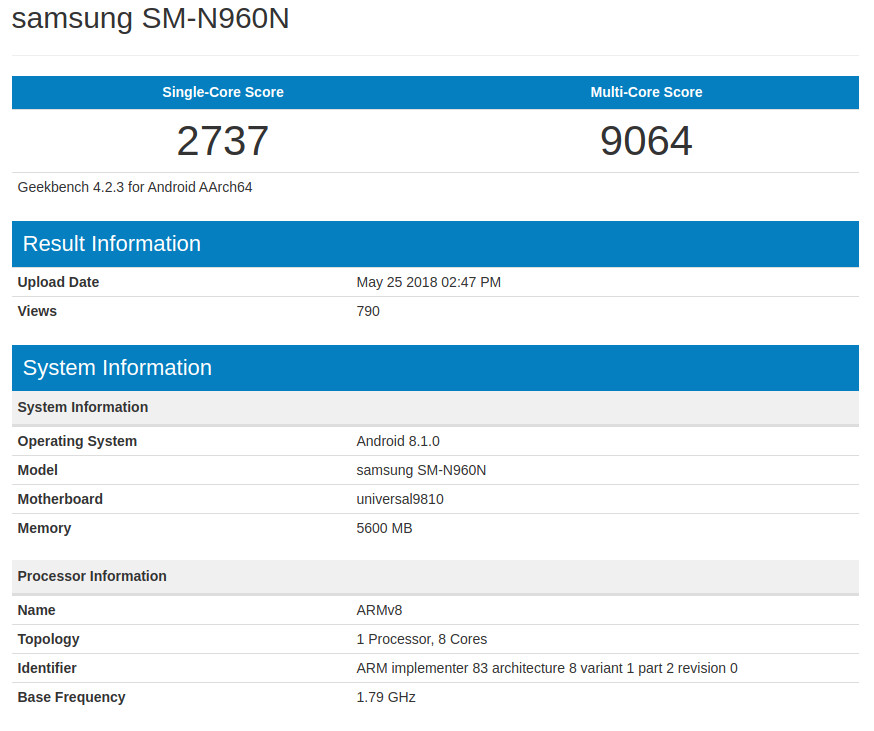 According to the benchmark listing, the device Samsung Galaxy Note9 will have 6GB RAM. It will be powered by the Exynos 9810 SoCchipset with 1.79GHz Octa-Core processor and will run on Android 8.1 Oreo with Galaxy Experience U.I.
Since, the device has gained 2737 in single-core and 9064 in multi-core . There is also expectation that it will also come with higher version 8GB RAM and  internal storage capacity of 512GB. Except these, the benchmark didn’t reveal much detailed related to its specifications.
The date of its announcement is still not confirmed by the company , but the rumor revealed that it will be announced on 29th July this year.

The predecessor Samsung Galaxy Note8 sports 6.3-inch Quad HD+ (2960 × 1440 pixels) Super AMOLED Infinity display with 522ppi, 18.5:9 aspect ratio. It has 6GB LPDDR4 RAM with 64GB/128GB/256GB storage, expandable memory up to 256GB with microSD card slot. It is also the first flagship phone from Samsung to come with dual rear cameras.
It is atmed with  Octa-Core Samsung Exynos 9 Series 8895 processor with Mali-G71 MP20 GPU and runs on Android 7.1.1 (Nougat). It has Hybrid Dual-SIM functionality.

The users have the option to get the device Samsung Galaxy Note8 in Midnight Black and Maple Gold colors .

Proceed with us for more information.