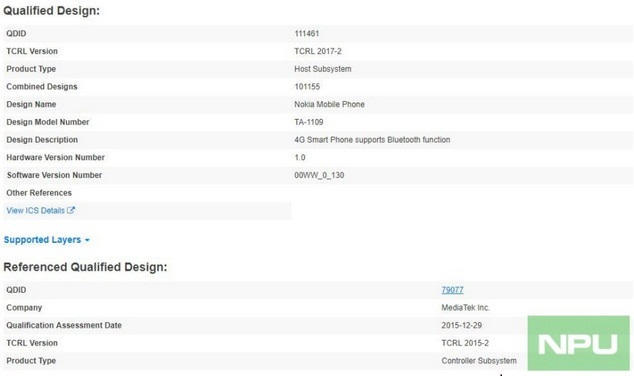 A latest upcoming Nokia smartphone with a model number TA-1109 received the Bluetooth certification. Since, the same model have already been certified by the CCC wireless authority in April this year. The certifications didn’t reveal much details related to the device except that it will be powered by a Mediatek chipset and will support Bluetooth 4.2. The name of the device is still not confirmed by the company , but it is expected that it may be either Nokia 5.1 Plus or Nokia X5.

Also two more models the Nokia X6 – TA-1083 and TA-1116 – have also been spotted in Bluetooth certification listings , where the model number TA-1116 likely to be introduced as globally in coming days.

If we expect it as Nokia 5.1 Plus , than it will be successor of the Nokia 5.1 that was announced last month which comes with a unibody design with 6000 series aluminium and sports 5.5-inch ( 1080×2160 pixels) FHD+ 2.5D curved glass display with Corning Gorilla Glass 3 protection . It has 2GB RAM with 16GB internal memory / 3GB RAM with 32GB internal storage capacity , which can be further expandable up to 128GB via microSD card slot. It has dual-SIM functionality, dimension of 151.1 x 70.73 x 8.27 mm and also has a fingerprint sensor .
It is armed with 2GHz Octa-Core MediaTek Helio P18 (MT6755S) processor and runs on Android 8.0 (Oreo) OS, upgradable to Android P.