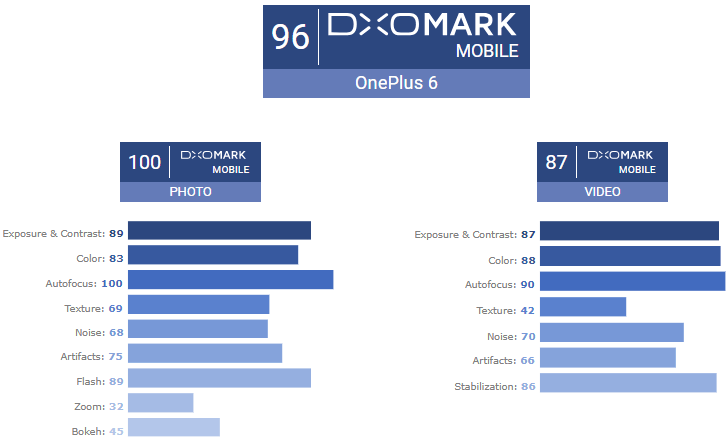 As we know the DxOMark Lab provides the image quality ratings for standalone cameras, lenses, and mobile devices that include cameras. Now the Lab released the report card of few smartphones which are known for magnificent cameras including OnePlus 6, Samsung Galaxy Note8 , both the models  Apple iPhone 8 , iPhone 8 Plus , the Google Pixel 2. and also iPhone X .

The DxoMark lab result comes in the favour of OnePlus 6 and the device passed the test  just like a true winner among  the Galaxy Note8 , Apple iPhone 8 , iPhone 8 Plus and the Google Pixel 2 but stay behind the iPhone  X by a single point.

It’s  rear-facing dual camera gains an overall impressive DxOMark score of 96 points and joined the group of the better-performing smartphones such as the Apple iPhone X, the Samsung Galaxy S9 Plus, and the Google Pixel 2 .
The OnePlus 6 achieved a total Photo score of 100 points, which is one of the better score for still images so far .

As we know the  overall Photo score is calculated from sub-scores in tests that examine different aspects of its performance under different lighting conditions and hence in this regard it has Video score of 87 points, with strong individual scores for color, autofocus, and exposure. It’s overall score comes from the  sub-scores just like the Photo score includes different criteria such as  Exposure (87), Color (88), Autofocus (90), Texture (42), Noise (70), Artifacts (66), and Stabilization (86).

The OnePlus 6’s Video performance didn’t gain impressive mark like  its Photo capabilities, it scores 87 for video, far behind the Apple iPhone X (89), and a bit low scorer than the Samsung Galaxy S9 Plus (91) and the Google Pixel 2 (96), as shown by  the lab’s photo comparisons.

Since, there is no doubt that it is the best performer comparative to those devices which has more cost with low performance.

For more details reviews on the test visit the DxO Lab’s website.

Stay  with us for more information.