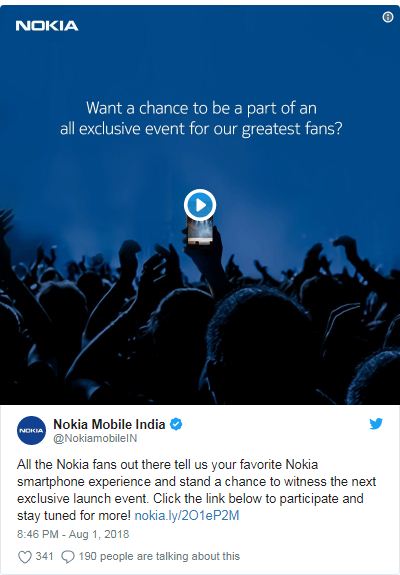 After the announcement of Nokia X6 in China in May this year at 1299 Yuan (INR 13800 approx) , its global version Nokia 6.1 Plus launched in Hongkong on 19th July at 2,288HK dollars or approx.( 250 euros, 20,000 rupees or 291 US dollars). Now the teaser image released by the HMD Global hints its early arrival in the Indian market, not only that the leaked report also suggests that the company has organized a contest for its Indian launching . But the company hasn’t confirmed its name yet , we only expect that there is much certainty of Nokia 6.1 Plus launching , because a  support page for the device has already surfaced on the Nokia India website in June and also the user guide via the website clearly mentions that:-

Your mobile device is also designed to meet the requirements for exposure to radio waves established by the India Department of Telecommunications. These requirements set a SAR limit of 1.6 W/kg averaged over one gram of tissue.
So it’s reasonable to say India is getting the Nokia X6.

So ,these are the reasons that we highly expected its arrival. There is also chance that Nokia 5.1 Plus (Nokia X5) and Nokia 2.1 will be followed by the Nokia 6.1 Plus at the event .
Since, the company hasn’t declared the date of launching of the device and also still silent on the name of the device yet. So, all will be confirmed very soon.

It is armed with 1.8GHz Octa-Core Snapdragon 636 14nm Mobile Platform with Adreno 509 GPU and runs on Android 8.1 (Oreo), upgradable to Android P.