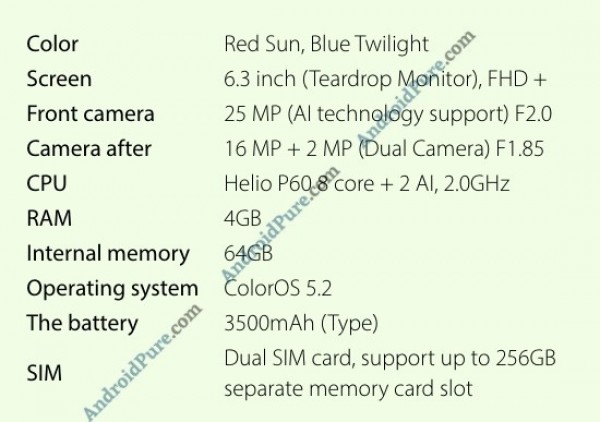 Recently , the teaser image of the upcoming devices Oppo F9 and Oppo F9 Pro was surfaced on the web via the official Twitter page from Oppo’s Malaysian division and hints its arrival in India and Malaysia in August without giving much details related to the device . Now this time, we are getting  the detailed rumored specifications of the device via Android Pure. 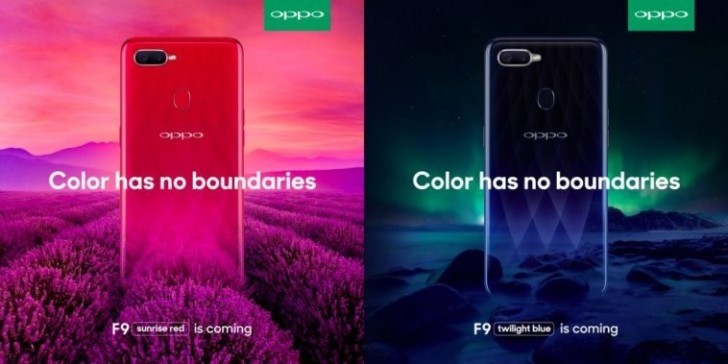 According to the latest report, the upcoming device Oppo F9 will sport a 6.3-inch Full HD + display with a notch at the top  and will have the  Corning Glass 6 protection. It will come with 4GB RAM, internal storage capacity of 64GB, which can be further expanded up to 256GB via microSD card slot. It will be armed with 2GHz octa-core Helio P60 processor and will run on Android 8.1 based ColorOS 5.2. A fingerprint sensor will be placed just below the dual camera.

The camera section of the device Oppo F9 will include dual rear camera of 16 MP + 2 MP with a f/1.85 aperture  and a front-facing camera of 25MP (f/2.0) with AI-based capabilities for capturing selfies . It will be backed up by a 3,500 mAh battery.
The users will get the device Sunrise Red and Twilight Blue. The more detailed information related to the smartphone Oppo F9 will be known on its announcement which is likely to be held on 15th August, as the teaser revealed recently.