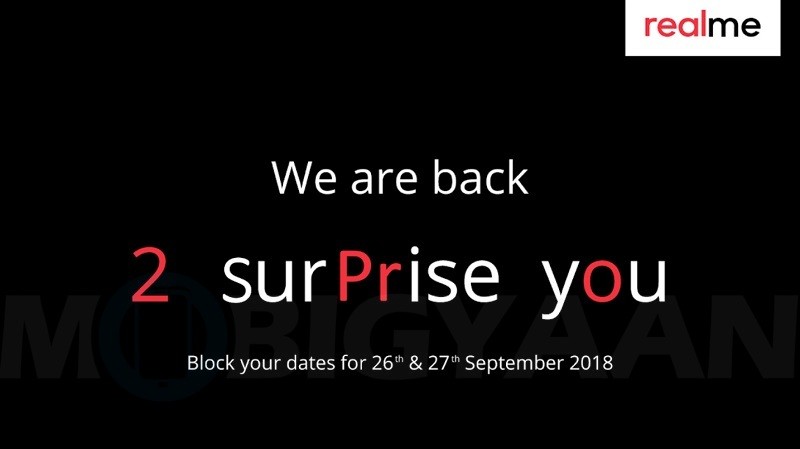 As we know the Oppo’s sub-brand Realme launched the smartphone Oppo Realme in Indian market last month at Rs. 8,990 for the 3GB RAM with 32GB storage version and the 4GB RAM with 64GB storage version at Rs. 10,990. Also we should remember that Realme 2 had achieved a new record by selling 2 lakh units in its first sale under five minutes in Indian market via Flipkart. Hence, such happening was definitely like hitting a jackpot for the newly formed Oppo’s sub-brand Realme.
Now the smartphone company once again in the path of announcing its successor Oppo Realme 2 Pro and in this regard it has sent out the invites. The released press invites hints its announcement in two dates- 26th and 27th September,2018 with a quote ” We are back 2 SurPrise you , Block your dates for 26th & 27th September 2018″.
Hence, there is certainty that the device will be announced on any one date and there is still mystery on another date. Also at the meantime, the date of the announcement of Opp’s Realme 2 Pro was already confirmed by one of the Realme’s representative as 27th September. The name of the device is neither declared by the company nor by the press invites, but the few focused letter of the press invites hints the name of the device as Realme 2 Pro.
Not a single specification of the upcoming device Oppo Realme 2 Pro revealed by the company yet, but we are expecting that it will come with better specifications compare to its predecessor Oppo Realme 2.

Since, its predecessor Oppo Realme 2 sports 6.2-inch  FullView 2.5D curved glass display with the resolution of 1520 x 720 pixels , aspect ratio of  18:9. It has Corning Gorilla Glass 3 protection. The device comes with 3GB RAM with 32GB storage / 4GB RAM with 64GB storage, which can be further expandable up to 256GB via microSD card slot. It has dual-SIM functionality , dimension of 156.2×75.6×8.2mm; and weighs 168g . It has face unlock and a fingerprint sensor on its back.