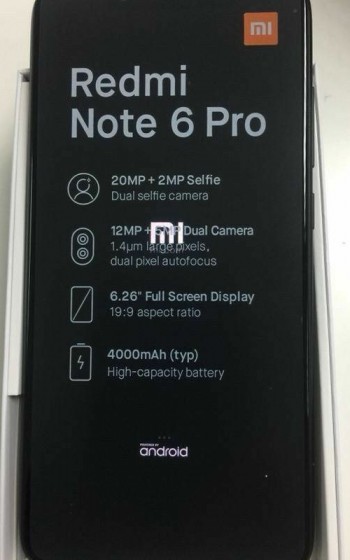 As we know the predecessor  Xiaomi Redmi Note 5 Pro was launched in Indian market on February this year and now the live images of the upcoming smartphone Xiaomi Redmi Note 6 Pro and its leaked retail box suggests that the device is on the way of launching in India and also revealed that the smartphone Xiaomi Redmi Note 6 Pro will sport a Full HD+  6.26-inch display with a notch ( resolution 2280 x 1080 pixels), aspect ratio 19:9. It will have dual rear camera setup with 12 MP and 5 MP sensor with 1.4µm pixel size , dual pixel autofocus and it will feature a dual front-facing camera with 20 MP and 2 MP sensor. It will come with 4GB RAM with internal storage capacity of 64GB. 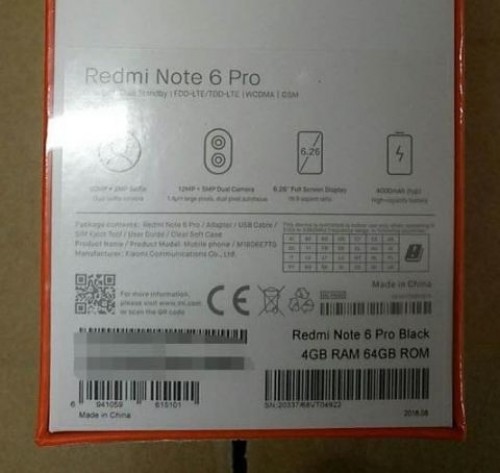 Here, we have the expectation that Xiaomi will introduce the device with more than one variants to complete the market demands so, it will likely to come with either 3GB RAM with 32GB storage or 6GB RAM with 64GB storage capacity or both the versions. The device will be powered by a massive 4,000 mAh battery. Since, the earlier report has already leaked that it will be armed with Snapdragon 660 processor with 4GB RAM and 64 GB storage capacity.
The cost of the device as well as its availability hasn’t confirmed by the company yet, but on seeing the leaked retail box image, we expect that it is waiting for its launching very soon.
The predecessor Xiaomi Redmi Note 5 Pro sports a 5.99-inch touchscreen display with a resolution of 1080 x 2160 pixels. It has 4GB/6GB RAM, internal storage capacity of 64GB, which can be further expanded up to 128GB via microSD card slot.
It is armed with 1.8GHz octa-core Qualcomm Snapdragon 636 processor and runs on Android 7.1.1. It has dual-SIM functionality, the dimension of 158.60 x 75.40 x 8.05mm and weighs 181.00 grams.
The camera section of the device Xiaomi Redmi Note 5 Pro includes a dual rear camera of 12MP+5MP and a front-facing camera of 20MP Sony IMX376for capturing selfies.
Connectivity wise, it features Wi-Fi, GPS, Bluetooth, USB OTG, FM, 3G and 4G including Compass Magnetometer, Proximity sensor, Accelerometer, Ambient light sensor and Gyroscope.