Huawei Honor Magic 2 spotted on Geekbench ahead of launching 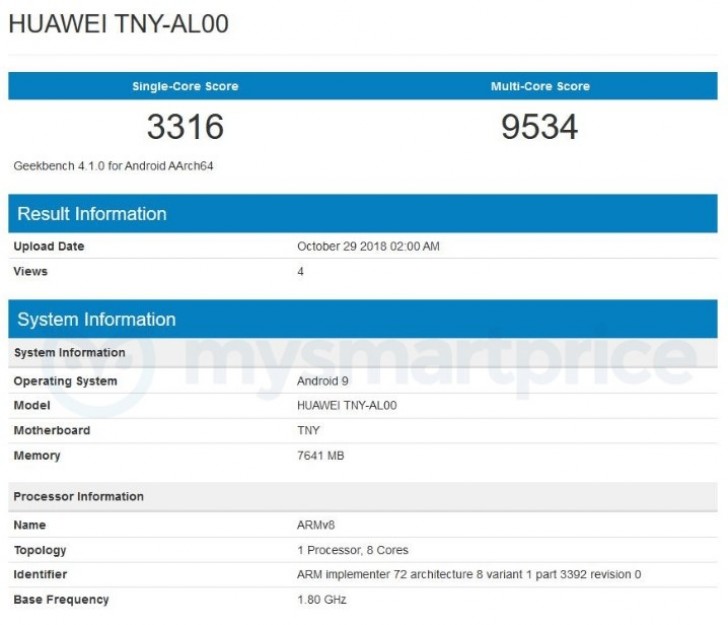 The Huawei’s sub-brand Honor has confirmed the launching of its latest smartphone Huawei Honor  Magic 2 with slide out design on 31st October. It has already certified by TENAA in China recently. Now the device spotted at Geekbench just ahead of its launching.
The Geekbench listing revealed tha the upcoming flagship smartphone Huawei Honor Magic 2 will come with 8GB RAM. It will be armed powered by Kirin 980chipset with octa-core processor and will run on Android Pie. It has gained 3316 single-core score and scoring of 9534 at multi-core. It will also feature voice assistant support Yoyo. The company has also released the teaser video of the phone.

The camera section of the device Huawei Honor Magic 2 will include triple rear camera including 16MP rear camera, 24MP secondary camera, 16MP Telephoto lens, LED flash and a front-facing camera of 16MP with 2 TOF lenses for 3D face unlock.
Connectivity wise, it features Dual 4G VoLTE, Wi-Fi 802.11 ac (2.4GHz and 5GHz) (wave2), Bluetooth 5 LE, GPS (L1 + L5 dual band), NFC, USB Type-C (GEN1) and will be backed up by 3400mAh battery with 40W SuperCharge. The users will get the device Huawei Honor 2 in Black color.
We will get the confirmed information related to the device within two days on its launching.