vivo 1817 spotted at GeekBench with 2GB RAM and Android 8.1 Oreo 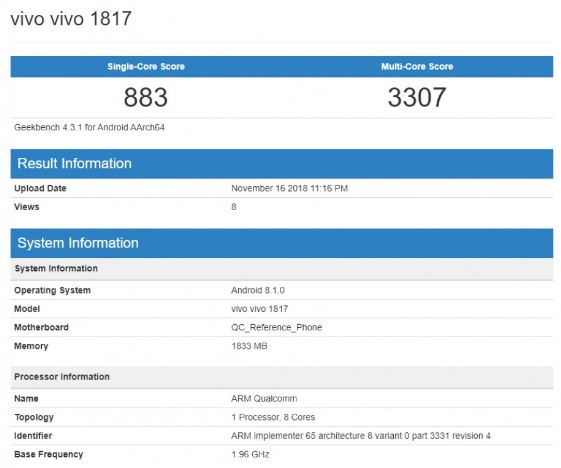 A latest smartphone with the model number vivo 1817 spotted on GeeekBench and revealed its single core score of 883 and multi-core score of 3307. The GeekBench listing also shows that it will come with 2GB RAM and it will be powered by octa-core processor with 1.96 GHZ and will run on Android 8.1 Oreo.
As we know its predecessor Vivo Y93 was announced recently and was leaked on benchmarks with the model number v1818. Both of the smartphones Vivo Y93 and Vivo Y95 were powered by Octa-Core Snapdragon 439 processor , so there is expectation that the upcoming Vivo Y-series smartphone vivo 1817 will be also armed with the similar processor.
We are waiting for its other detailed specifications in coming days.