Nokia 9 PureView set to be announced in the last of January, 2019 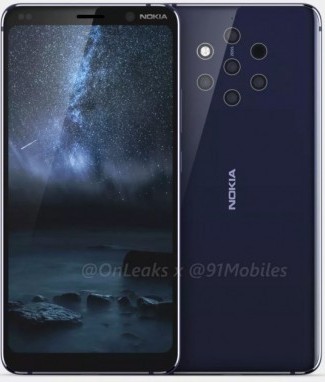 The most wanted and long awaited upcoming flagship smarphone Nokia 9 with Pureview camera was revealed in live images in September this year. Now the latest report suggests that the flagship device Nokia 9 is likely to be announced in the last week of the January 2019. So, the HMD Global is just few days away from its dream project and definitely in the path of making history in coming days!
As we know the Nokia 9 PureView smartphone has already delayed much for its announcement and hence, earlier of this month the HMD Global has explained the reason that the quality of the camera was not up to the mark for the device and also added that the five cameras on the Nokia 9, which will be arranged in a circle with a lightning flash is a challenging job.
According to the latest rumor, the device Nokia 9 will sport a 5.9-inch Quad HD OLED screen with the resolution of 1440 x 2960pixels. It will come with 8GB RAM, internal storage capacity of 128GB, which ca be expandable via microSD card slot.It will be armed with Snapdragon 845chipset and will run on Android 9.0 (Pie) .
It will be embedded with a series of Zeiss branding five cameras on its back including a depth sensor and a front-facing camera of 12MP.
It will be backed up by massive 4,150 mAh battery.