Huawei Honor 8A set to be announced on 8th January 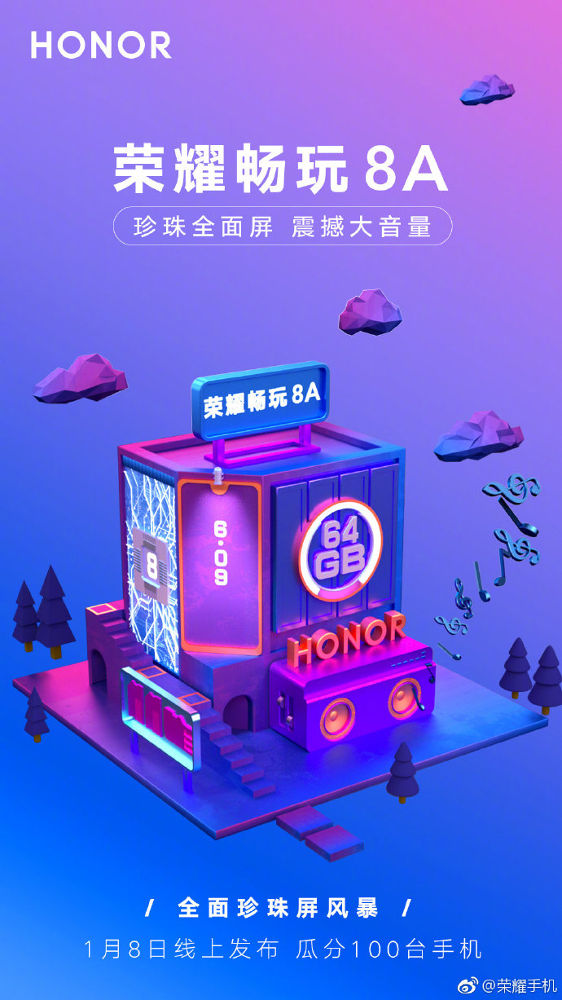 Last month , the upcoming smartphone Huawei Honor 8A with the model numbers JAT-TL00 and JAT-AL00 spotted at TENAA with leaked specifications. Now the Huawei’s sub-brand Honor confirmed its announcement on 8th January in China and hence, in this regard it has sent out the press invites for this occasion.
According to the latest rumor, the upcoming smartphone Huawei Honor 8A with waterdrop notch display will sport 6-inch Full HD+ 19:5:9 2.5D curved glass display with the resolution of 1560 x 720 pixels. It will come with 3GB RAM, 32GB / 64GB storage, which can be expandable up to 512GB via microSD card slot. It will have dual-SIM functionality, dimension of 156.28×73.5×8.0mm and weighs 150g. It will lack of a fingerprint sensor.
It will be armed with 2.3GHz Octa-Core (ARM Cortex A53) MediaTek Helio P35 12nm Processor with 680 MHz IMG PowerVR GE8320 GPU and will run on Android 9.0 (Pie) with EMUI 9.0.
The camera section of the device Huawei Honor 8A will include a rear camera of 13MP with LED flash and a front-facing camera of 8MP.
Connectivity wise, it will feature 4G VoLTE, Wi-Fi 802.11 b/g/n, Bluetooth 4.2, GPS + GLONASS and will be backed up by 3000mAh battery.
The company will make the device Huawei Honor 8A available in Black, Blue, Gold, Red.
The cost of the device is still unconfirmed, it will be known on its announcement.