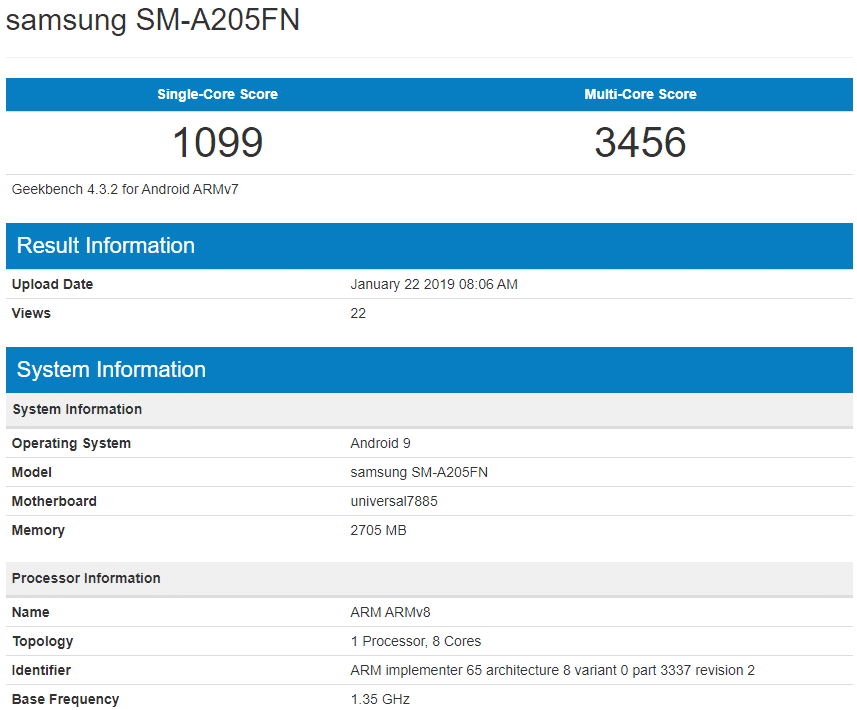 As we know a number of three affordable smartphones of Samsung Galaxy A -series namely Galaxy A20, Galaxy A30 and Galaxy A40 from the Samsung’s camp are preparing for the announcement this year. Two of the upcoming smartphones Samsung Galaxy A30 and Galaxy A40 smartphones were already showed their presence on the Geekbench benchmark in recent days. Now one more device Samsung A20 with the model number samsung -SM A205FN spotted on the same Geekbench benchmark with the scoring o 1,099 points in the single-core test and 3,456 points in the multi-core test. It also revealed some of its specifications.

According to the Geekbench listing, the Galaxy A20 will come with 3GB RAM. It will be armed with an Exynos 7885 14nm octa-core processor and will run on Android 9.0 Pie. So till date, the benchmarks confirmed that all the three Galaxy A series smartphones will be powered by its home made Exynos 7885 chipset. There is expectation that it will have a rear- or side-mounted fingerprint sensor including a dual rear camera setup and an AI-powered front-facing camera and will have Infinity-V display.

The date of announcement of Samsung Galaxy A series smartphones are not confirmed yet, but after spotting on benchmarks, there is lots of chance that the smartphones will be announced in the first half of 2019.