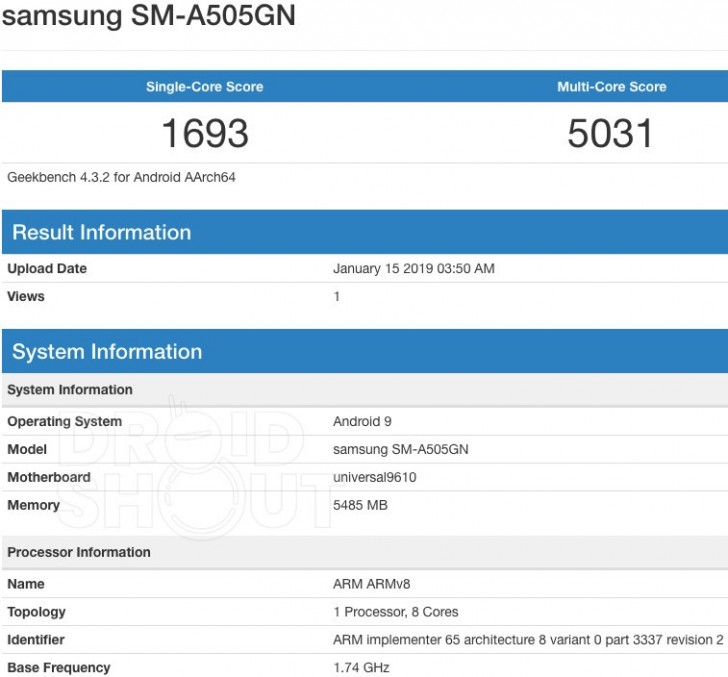 As we know the smartphone Samsung Galaxy A50 with the model number SM-A505FN/DS received the certification by the Wi-Fi Alliance, after few hours, the upcoming smartphone spotted at Geekbench with more information related to it .
The Geekbench listing revealed that the device Samsung Galaxy A50 with the model number- samsung SM-A505GN will come with 6GB RAM,and it ill run on Android 9 .We can also see the scoring of 1693 at single core and 5031 at double-core.

Also recall last month when the smartphone Samsung Galaxy A50 with the model number SM-A505FN has also showed its presence on Geekbench with few details such as it will have 4GB RAM. It will be powered by an Exynos 7 9610 chipset with a 10nm SoC chipset with four Cortex-A73 cores (2.3GHz) and four A53 (1.6GHz) processor with a Mali-G72 MP3 GPU and will run on Android 9. It had also showed the single core score of 1681 and Multi-core score of 4897.
So, after seeing the both Benchmarks reports, we have the assumption that the upcoming smartphone Samsung Galaxy A50 will come at least in two versions one with 4GB RAM and the other with 6GB RAM.
According to the latest rumor, the unannounced device Samsung Galaxy A50 will be backed up with 4,000 mAh battery , a rear camera 24MP, a fingerprint scanner  and it will also have Wireless charging feature.
Hence, these are the information what we have got till date. The date of its announcement is still not confirmed by the company yet, but there is expectation that it will be announced very soon.