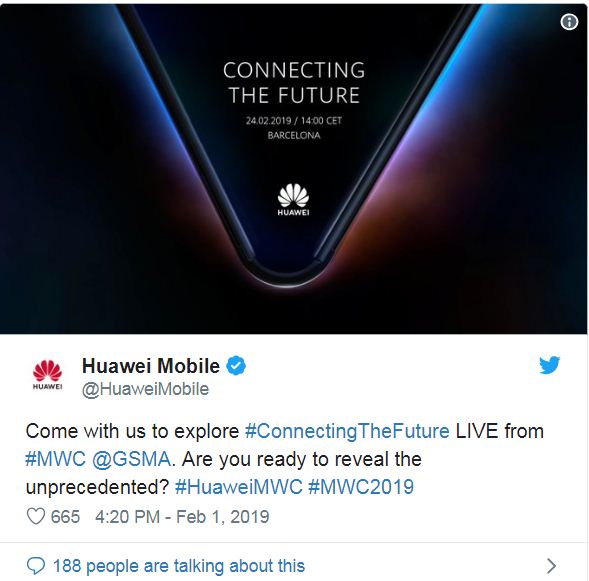 Just after revealing the promo video of the upcoming Samsung foldable smartphone, we have also a bit of information from the Huawei’s camp that the smartphone manufacturer Huawei sent out the invites for the announcement of its foldable 5G smartphone on 24th February at MWC ,2019 event, which will be held in Barcelona. Since, the Huawei’s CEO has already confirmed last year that the Huawei’s foldable phone will support 5G-connectivity.
It will be armed with its home made Balong 5000 chipset and it will sport a display of 5-inch and after unfold it will become an 8-inch flexible display.
The company has already filed a patent for its foldable display smartphone in March last year.
It is interesting to see who will first introduce the world’s first foldable smartphone , as there is also a report that Samsung is likely to introduce the foldable phone on 20th February, but it is officially not confirmed by the Samsung yet.

So, there is no doubt that the coming days will be definitely full of thrill and now the new trends of foldable phones has started and we will see more smartphone manufacturer being the part of this project.
If you like, you can buy the smartphones from Amazon.in