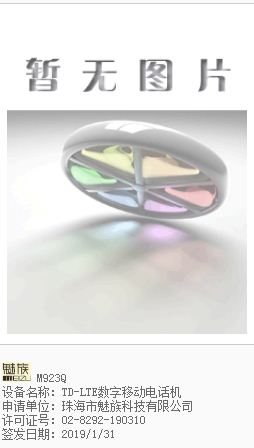 A latest upcoming smartphone with the model number M923Q spotted at TENAA. It is expected that the device will be announced either as Meizu Note 9 or Meizu M9 Note with mid-end specifications. If the device is announced as Meizu Note 9, than it will be successor of the Meizu Note 8 that was announced in October last year.
According to the latest rumor, the upcoming smartphone Meizu Note 9 / M9 Note will sport 6.2-inch Full HD+ 18.7:9 2.5D curved glass display with the resolution of  2244×1080 pixels.It will come with 6GB LPDDR4x RAM, 64GB / 128GB internal storage.It will have the dimension of 153.11×74.34×8.65mm; , weighs 169.7g , dual-SIM functionality and will also include a fingerprint sensor.
It will be armed with 2GHz Octa-Core Snapdragon 675 processor with Adreno 612 GPU and will run on Android 9.0 (Pie) with Flyme 7.

The camera section of the device Meizu Note 9 / M9 Note will include dual 48MP rear camera with LED flash, f/1.8 aperture, 5MP secondary camera and a front-facing camera of 20MP. It will also feature Samsung ISOCELL Bright GM1 sensor.
Connectivity wise, it will feature Dual 4G VoLTE, Wi-Fi 802.11 ac (2.4GHz / 5GHz), Bluetooth 5 LE, GPS + GLONASS, USB Type-C and it will be backed up by 4000mAh battery with fast charging.
The date of its announcement is still not confirmed by the company yet, but it is rumored to be announced later this month.

If you like, you can buy the smartphones from Amazon.in