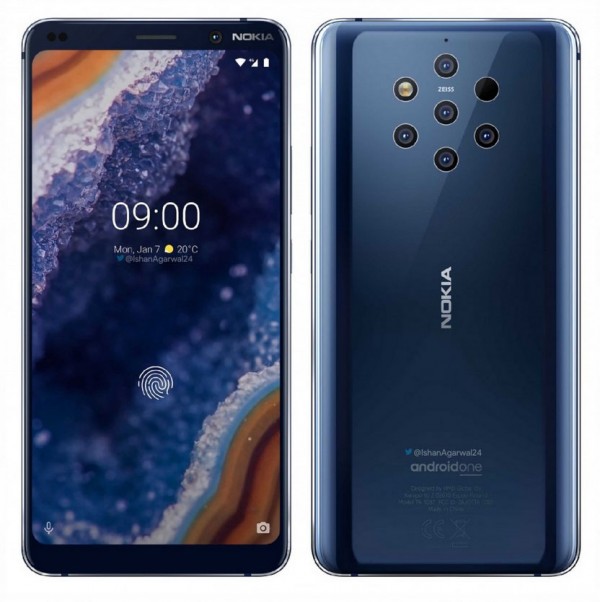 Recently, the upcoming smartphone Nokia 9 PureView with penta rear cameras received FCC certification and also revealed more details related ot it. Now ahead of its announcement,  Edoardo Cassina who is global head of social media Nokia mobile has posted a photo on Instagram which is captured by Finnish professional photographer Konsta Punkka with Nokia 9 PureView smartphone and also it shared the image of the smartphone. 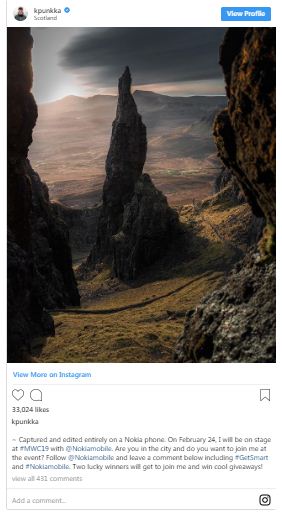 After looking the captured shot which is a dark scene, we feel that the image is the better composition of timing, depth and balances. It also hints that the cameras will come with awesome result with high-dynamic range situations.
However, the post also mentioned that the leaked captured shot was first edited on the same phone. Anyhow what’s the reason, we will get the perfect answer in few hours after its announcement on 24th February at 4PM local time in Barcelona, Spain.

According to the latest rumor, the device Nokia 9 PureView with metal frame and glass back will sport a 5.9-inch Quad HD OLED screen with the resolution of 1440 x 2960pixels. It will come with 6GB RAM /8GB RAM, internal storage capacity of 128GB, which can be expandable via microSD card slot.
It will be armed with Snapdragon 845chipset and will run on Android 9.0 (Pie) . It will feature an in-display fingerprint sensor, 18:9 aspect ratio .It will have a water resistance body with IP68 ratings.

The camera section of the device Nokia 9 PureView will feature penta cameras including two 12-megapixel cameras, two 16-megapixel cameras and an 8-megapixel camera, which will be the combination of telephoto, wide-angle and depth-sensing lenses and will also come with a front-facing camera of 12MP.
It will be backed up by massive 4,150 mAh battery and will also support Nokia OZO Audio and wireless charging.