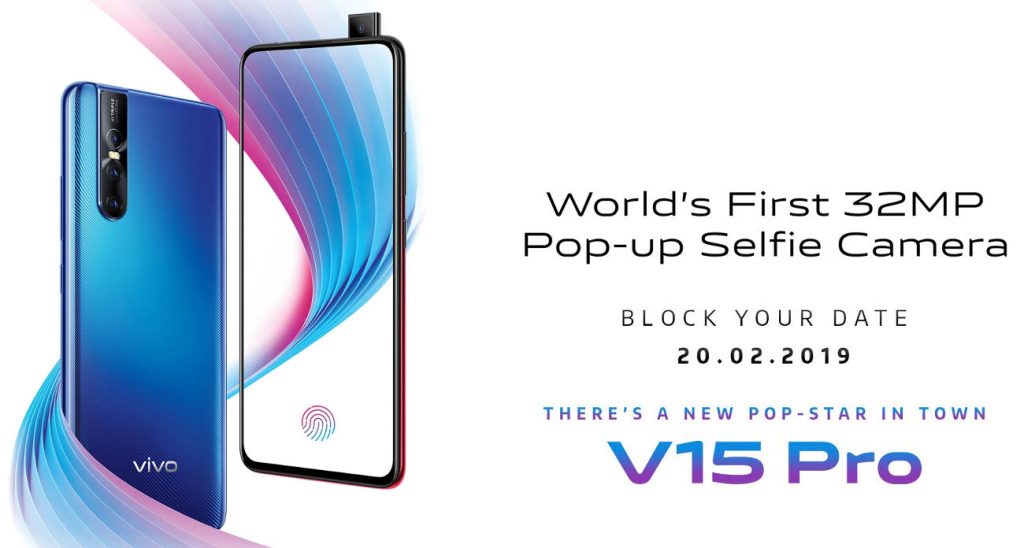 As we are approaching to the announcement date of the upcoming smartphone Vivo V15 Pro, the more teaser images of the device revealed on Amazon.in . Since, the company has already prepared for its launching in India on 20th February and it will be available via Amazon.in.

Also the company has given the ‘notify me ‘ button option for the users on its site to get the update information related to it. It will be the world’s first smartphone with 32-megapixel pop-up selfie camera, as confirmed by the Vivo earlier.
It will be the successor of the Vivo V11 Pro that was launched in Indian market in September last year.

It features triple rear cameras with AI features  including 48MP rear camera, which offers 12MP effective Pixels. The earpiece can be seen on its top edge. The teaser image of the device leaked in Blue color, so there is expectation that it ill be available in Blue color including various colors as well.
The company has already released the teaser video showing the company’s  brand ambassador Aamir Khan using the phone.

The leaked teaser image of the smartphone Vivo V15 Pro revealed that it will come with the next-generation in-display fingerprint scanner, SIM slot, USB Type-C Port and the loudspeaker grill on the bottom. It will also sport a large FullView display with minimal bezels. It will have 6GB RAM and will be armed with Snapdragon 675 SoC chipset .
The cost of the device Vivo V15 Pro is still not confirmed by the company yet , but it is rumored to be priced at Rs. 30,000.
We will get the confirmed information in few days on its launching.

You can get the smartphones from Amazon.com / Amazon.in