OnePlus Z likely to be announced on 14th April 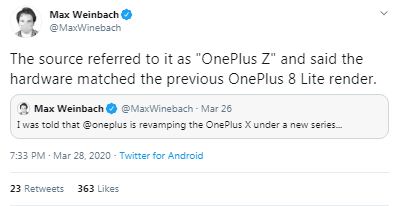 A latest rumor hit the web that the newly smartphone OnePlus Z will be announced on 14th April. It will be the first smartphone of OnePlus Z series. Earlier, it was rumored to be known as OnePlus 8 Lite. It will come with mid-end specifications.

As per the latest rumor, the upcoming smartphone OnePlus Z will sport 6.4-inch AMOLED display with a resolution of 1080 x 2340 pixels and 403 ppi pixel density. It will come with 8 GB RAM and 128 GB internal storage capacity.
It will be armed with MediaTek  Dimensity 1000 chipset and will run on Android v10 (Q) operating system.

Connectivity features in the smartphone include WiFi, Bluetooth, GPS, Volte, and more. It will be backed up by a 4000 mAh battery.

Also there is expectation that the smartphone OnePlus Z will be launched in the Indian markets on 26th June this year at Rs 34,990. Yet, these are all based on rumored information, so confirmed report will be know very soon.