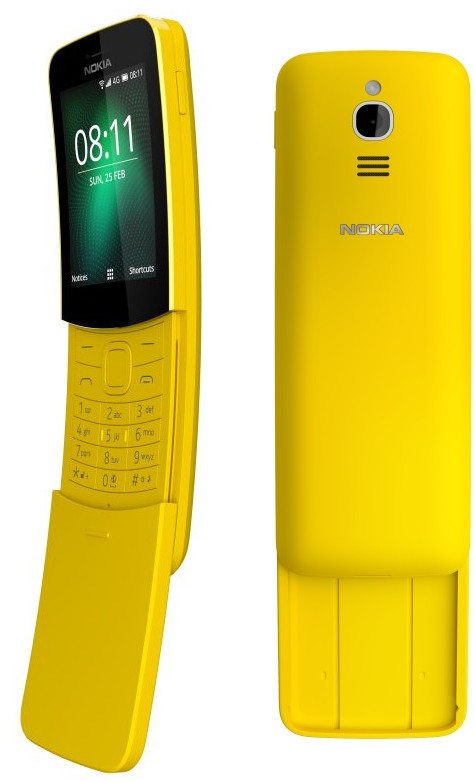 The Nokia 8110 4G  ‘Bananna Phone’ feature phone was announced in MWC 2018 event in February this year after that it was launched in Indian market earlier of this month at Rs. 5999. Now the HMD Global makes its availability for the Indian users.
The Nokia 8110 4G feature phone sports 2.4-inch QVGA display with the resolution of 320 x 240 pixels.It has 512MB RAM, internal storage capacity of 4GB, which can be expandable via microSD card slot. It has single/dual-SIM functionality, dimension of 133.45 x 49.3 x 14.9 mm; and weighs 117 g.
It is certified by an IP52 ratings , which gives it protection from limited dust ingress and water spray less than 15 degrees from vertical. So, we can says that it is not fully water and dust proof.
It is armed with 1.1GHz Dual-Core Qualcomm Snapdragon 205 (MSM8905) processor with Adreno 304 GPU and runs on Smart Feature OS powered by KaiOS.

It has a rear camera of 2MP with LED flash. It comes with various apps such as Google Assistant, Google Search, Google Maps, Facebook, and Twitter.
Connectivity wise, it features 4G VoLTE, WiFi 802.11 b/g/n with WiFi hotspot, Bluetooth 4.1 LE, GPS, USB 2.0 and is backed up by 2000mAh batter
The users can get the device Nokia 8110 4G in Black and Yellow colors from 24th October via offline stores, Flipkart and Nokia online store.