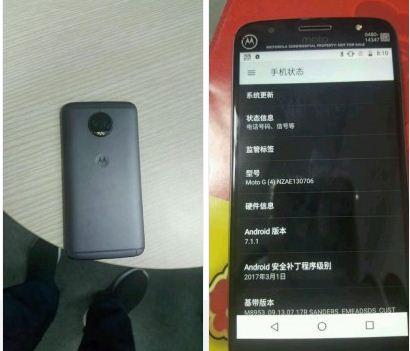 A couple of days ago, the upcoming smartphone Motorola Moto G5S Plus leaked in images with dual rear-camera. Now first time, the device revealed in live images and raised the expectation of having a display of 5.5-inch as well as a dual-camera setup on its rear section. Since, the leaked image doesn’t unveil any fresh details but it repeats the previous rumors, what we got so far. It will come with metal back plate along with plastic frame. It will be powered by a Snapdragon 660 chipset. Except these, we have no much information so far.

For your reference, the predecessor Motorola Moto G5 sports a Full HD display of 5-inch with the resolution of 1920 x 1080 pixels, it has Corning Gorilla glass 3 protection. It comes with 3GB RAM, internal storage capacity of 16GB, which can be further expanded up to 128 GB with microSD card slot. It is powered by 1.4GHz Octa-Core 64-bit Snapdragon 430 (MSM8937) processor with Adreno 505 GPU and runs on Android 7.0 (Nougat). It has dual-SIM functionality and comes with the dimension of 144.3x73x9.5 mm and weighs 144.5g. It has a fingerprint sensor embedded into the home button and also has water repellent nano-coating.The Moto G5 has a removable back cover as well as a removable battery.