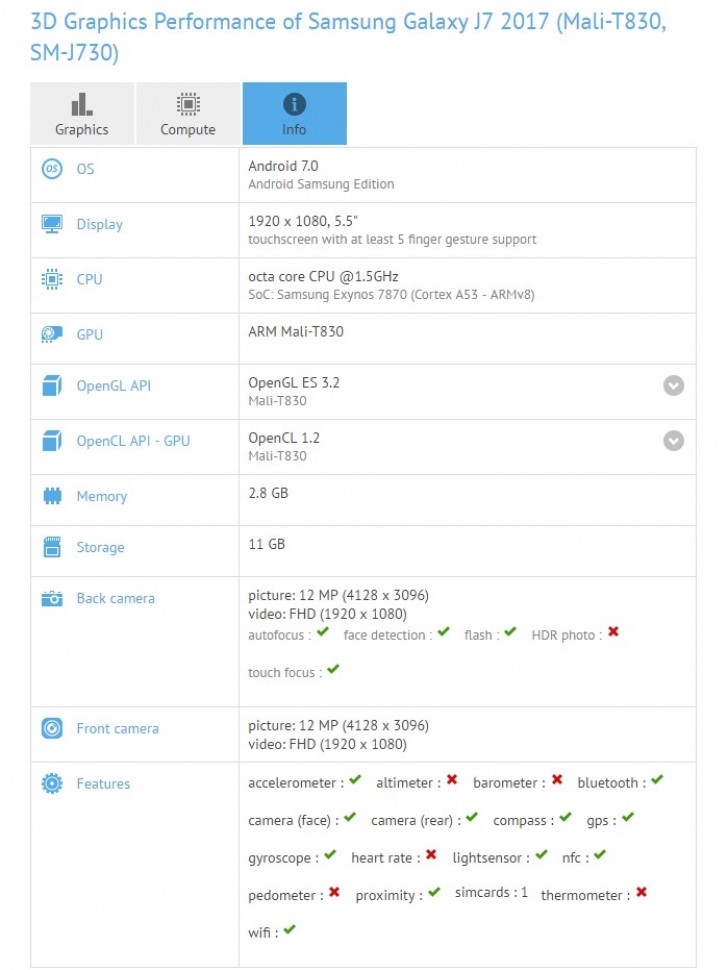 The unannounced smartphone Samsung Galaxy J7 (2017) spotted on GFXBench with leaked specifications. Since, it is the second time that it revealed on GFXBench mark with different and better specifications compare to the last one that was shown on the same benchmark in February, 2017, which revealed that it will come with a 5.5-inch 720pixels touchscreen display, 2GB RAM, internal storage capacity of 16GB. It will be powered by the Samsung Exynos 7870 chipset with a 1.5 GHz octa-core Cortex-A53 processor with ARM Mali-T830 GPU and runs on Android 7.0 Nougat. It will feature a rear camera of 8MP and a front-facing camera of 5MP. Since the device Samsung Galaxy J7(2017) already received Wi-Fi certification a couple of months ago.

Now the recent GFXBench benchmark listing unveiled that the device Samsung Galaxy J7 (2017) will sport a Full HD display of 5.5-inch, 3G RAM, internal storage capacity of 16GB. It will be armed with Exynos 7870 with octa-core processor of 1.5 GHz with Mali-T830 GPU and runs on Android 7.0 Nougat. It will include both front-facing and rear camera of 12MP with Full HD video recording.
Hence, after seeing the difference in specifications of the device Samsung Galaxy J7 (2017) at the same benchmarks, we came to the conclusion that the device is likely to come in different versions very soon.