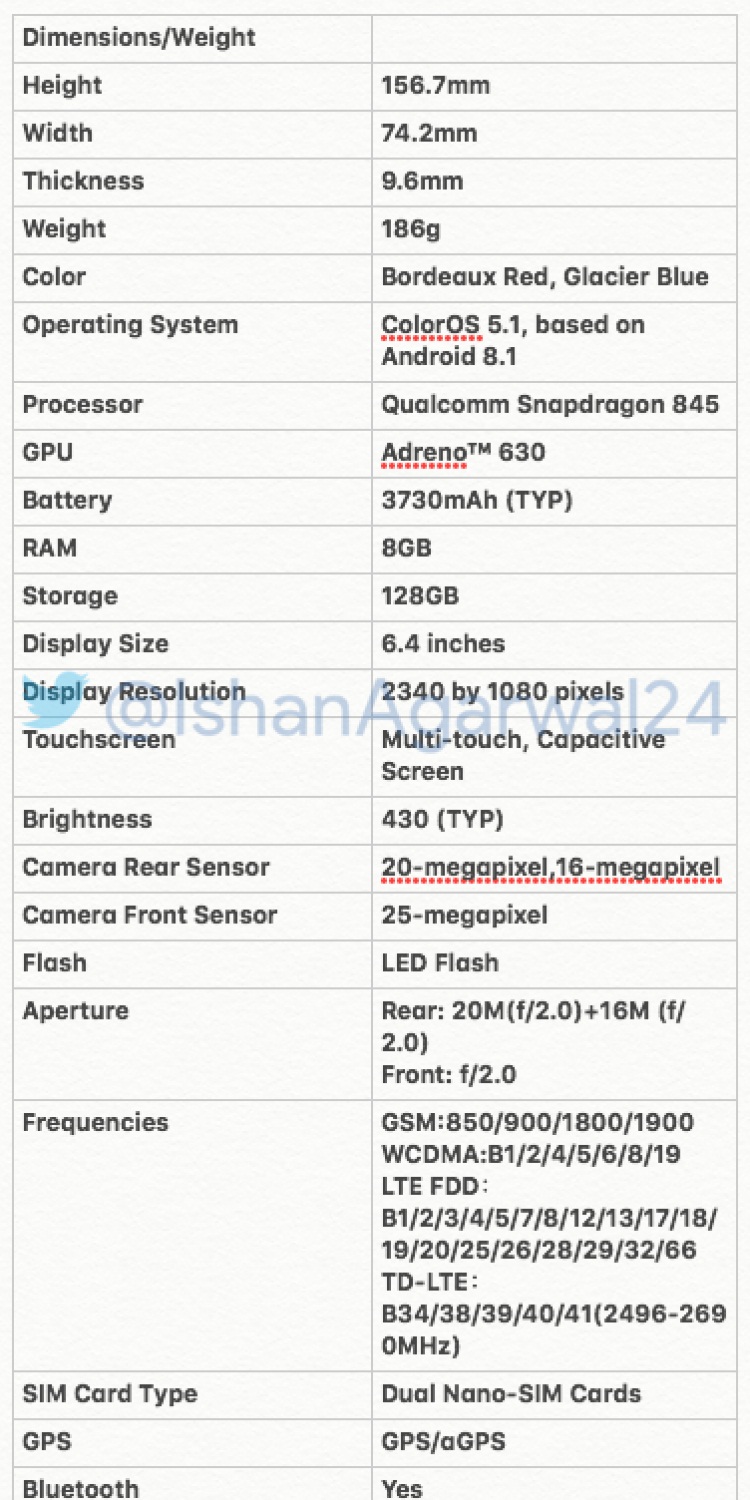 The upcoming smartphone Oppo Find X has already showed its presence on TENAA ahead of its announcement, which will be held on 19th July at Louvre , Paris. Now the detailed specifications of the smartphone revealed on the web via the noted Indian tipster Ishan Agarwal.

It will come with 8 GB of RAM , internal storage capacity of 128 GB, but the earlier reports also suggested that it will have 256GB storage. So, there is lots of chance that it will come in two variants. It will be backed up by  a 3,730mAh battery.
The camera section of the device Oppo Find X will include dual rear camera of 20MP with f/2.0 aperture ,16MP secondary camera and a front-facing camera of 25MP with f/2.0 aperture.
Connectivity wise, it will include dual-SIM support, NFC, Bluetooth, Wi-Fi 802.11ad and GPS.

Also the TENAA listing ,  revealed that the device Oppo Find X will have two model numbers PAFM00 and PAFT00 with similar specifications and also unveiled that it will sport 6.3-inch full-HD+ (1080×2340 pixels) AMOLED 19:5:9 2.5D curved glass display, 8GB RAM , internal storage capacity of 128GB without any further expansion.
It will be armed with a 2.8GHz Qualcomm Snapdragon 845 octa-core SoC chipet with Adreno 630 GPU and will run on Android 8.0 Oreo with Color OS. It will have dual-SIM (Nano +Nano) functionality, dimension of 156.7×74.3×9.4mm and weighs 186 grams. It will come with a fingerprint sensor on its back.
The device Oppo Find X will include a vertical dual rear camera with 16MP , secondary camera with 2MP and a front-facing camera of 16MP with 5x optical zoom system.
Connectivity wise, it will include Dual 4G VoLTE, WiFi 802.11ac (2.4GHz/5GHz), Bluetooth 5 LE, and GPS and it will be backed up by a 3645mAh battery with VOOC fast charging .

So, almost all the specifications are similar as leaked on TENAA  as well as unveiled  by the tipster. We have to wait few more days to see the officially confirmed specifications of the device.