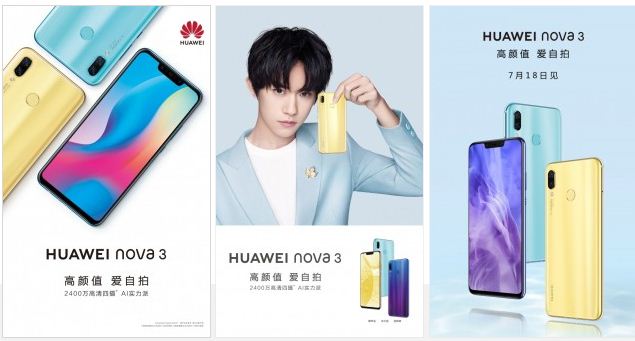 A latest rumor hit the web via the Weibo post that the smartphone company Huawei has much certainty  to introduce a new smartphone Huawei Nova 3 on 18th July in Shenzhen. It will be the successor of the Huawei Nova 2 that was announced in China in May last year.

According to the latest rumor, the device Huawei Nova 3 will have much similar design, but with different specifications to the Huawei P20 Lite that was announced in March this year. It will come with a 6.3-inch  LCD display with a Full HD+ resolution with  19:9 aspect ratio. It will have  6GB RAM, internal storage capacity of 64 GB or 128 GB. It will be powered by  Kirin 659 /Kirin 710 SoC chipset with the octa-core processor of 2.3 GHz.

The camera section of the device Huawei Nova 3 will include AI dual camera with 16MP and 24MP and two front-facing cameras of 24MP and 2MP.
It will be powered by 3,650 mAh with Super Charge technology and the users will get it in three colors including  Blue, Aqua, and Yellow.